There were two choices on this route, a 233 mile route taking in Tebay to buy cake & beer & 213 miles for those less inclined. The route got straight into the good stuff, zig-zagging a bit before taking the A689 south, it had good sight lines & long straights punctuated by sharp bends. At Raise we took the A686, which was a real corker, fast rolling bends & a good view. 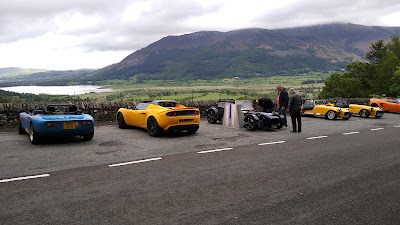 At Langwathby we crossed the river Eden on a single track box girder bridge immediately after a blind left hand bend, fortunately traffic lights had been installed since the StreetView car was there last. Next was the Whinlatter Pass, where we stopped for coffee & put the hoods on as the weather had come over inclement. Then the Honister Pass, followed by Keswick for a fuel stop on the way out of town.
We were supposed to head south & turn off the main road to run down the far side of Thirlmere, re-joining the A road for the Pass of Dunmail Raise, but a closed minor road meant we had to take the trunk route where all the traffic was – but at least it was pretty, then Windermere & Burnside – there’s not much choice in the roads in that area, so again we had to sit in the traffic. 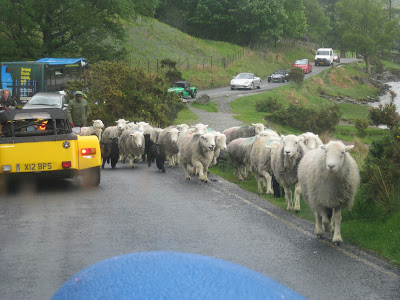 At one point we were on a minor road & rounded a corner to find a traffic jam, at the front of which was a herd of sheep & a bunch of Caterhams, two of whom spoke to us - but obviously only the Caterham drivers. I think I may have got a surreptitious thumbs up from one when he thought the others couldn't see. 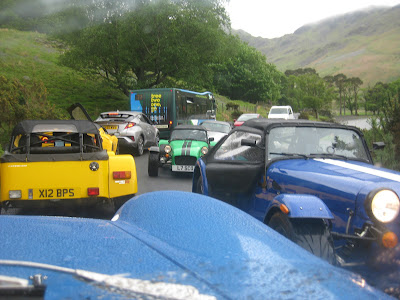 After that came the planned visit to Tebay to pick up lemon drizzle cake & local ale, however all the trouble with the minor road had baffled a couple of SatNavs (mine was asking me to turn round for 70 miles) so we followed those whose SatNavs were still working, but naturally as these things go they had opted for the short route, so I had to go cakeless.
At Hardraw we turned north for the specially requested Buttertubs Pass to complete four passes in a day, then traveled north towards Tan Hill as another special request, but again a closed road confused our devices. We stopped to discuss the problem & then realised we were right outside an almost tumble-down farmhouse selling coffees & snacks from the back door. The lady said they had only been open 5 weeks & had no “official” loo, but allowed us to use hers if we could negotiate the building site & vicious man eating dachshunds. 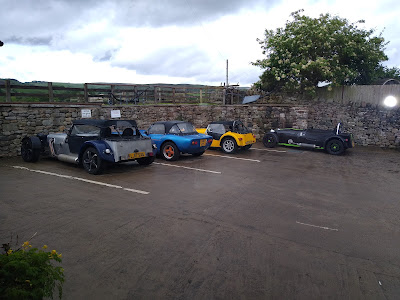 After that it was deserted moorland roads more or less all the way back to the excellent Brough Castle Ice Cream Parlour (double waffle cone – fudge & custard cream flavours) then some more brilliant & deserted roads back to the hotel.
It is very noticeable in Northumberland that when you come up behind a slower moving vehicle they often pull over to let you pass. We like this. 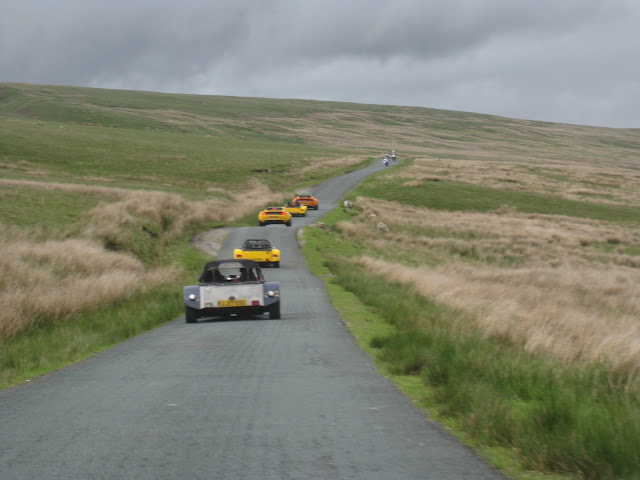