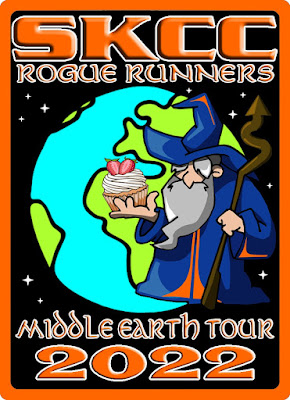 I'm just back from the RogueRunners 22 - The Middle Earth Tour. I have notes & photos to share, but it's late, I need a bath & right now I'm just going to set the scene & tell you IT WAS EPIC!!

The scenery, the base town, the lack of traffic, the roads, the fellow travelers. All of it - EPIC!

Last year we decided that the north coast of Scotland was too far & we'd keep the time away from home down a bit, so we settled upon Northumberland / Cumbria & I found a little town called Haltwhistle right in the middle, in fact, right in the middle of Britain & there in the middle of Haltwhistle was the "Centre of Britain" hotel, so as these things do, the tour got named "The Middle Earth Tour" with each route named after a chapter in The Hobbit, The Lord of the Rings, or one of the films. Linda designed the tour sticker & we were all set to go.
Nine (not "the nine") grown adults in eight unsuitable cars, with over 2,000 miles to cover in a period of spiraling fuel prices. What could possibly go wrong?