RogueRunners 22 Day One - An Expected Journey (360 miles after Thurrock) 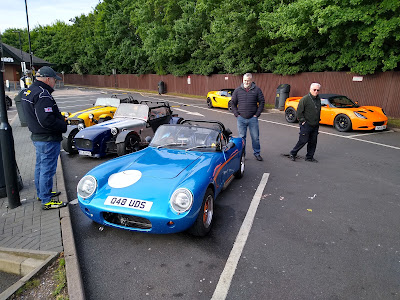 On the morning of day one, I was awake before sun up & trying to be as quiet as possible getting the car out before heading to Thurrock for the start of Rogue Runners ’22 “The Middle Earth Tour”. The first part always makes me a bit nervous, I hear every creak & squeak the car makes & worry it the fist sign of impending doom & the ignominy of coming home on a truck. Fortunately until I refurbish the rear suspension this coming winter, the Stylus makes an awful lot of creaks & squeaks so I got used to it pretty quickly.

The weather was dry as I rumbled round the M25, but the car seemed to be going well. I arrived at the start to find two Sevens & two Elises, the third Seven arrived pretty promptly & we set off along the M25 / M11 to get us out of the South East as quickly as possible. 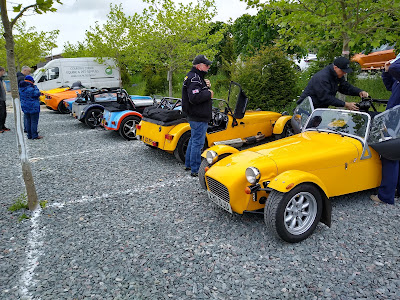 After an uneventful run along the motorways we passed RAF Wittering with it’s slightly sad looking Harrier II parked outside & after a quick refuel at a stupid price, we found our way into the breakfast venue & were joined by Robert, who couldn’t come on the tour this year but had driven a long way just to see us off, Linda who was local ish & Duncan & Alison who had driven up from the south coast the night before & stayed over in a hotel.

After a very good breakfast in the Stamford Garden Centre, we waved farewell to Robert & headed out passing Upper Hambledon -  a village almost marooned on it’s own island in the middle of Rutland Water & passed directly through Melton Mowbray without stopping for pies. Further & further west we travelled in order to avoid Nottingham until we picked up the M1 at Kegworth & turned proper north. At one point Neil – who hasn’t been on a full tour before said over the radio “this road is really good” – much better was to come.

It was only 50 miles of motorway before we left the main roads & headed for the moors, there was a another fuel stop with about 50 Hell’s Angels loitering about, before we got to the good scenery & passed through Thongsbridge where we took Thong Lane to Netherthong – look, it’s on the map – why would I make it up?

Shortly after this, traffic lights at some road works spit us into two groups, but appropriately given the name of the tour we all drove past a guest house called The New Hobbit, but at Sowerby Bridge, my little group got further reduced when the lead cars went right when my SatNav was saying left, I got separated, but turned right in the hope of re-joining & could hear confusion & talk of turning round over the radio as my satnav guided me through the town & out the other side. I meandered along quietly by myself until feeling in need of refreshment, I called into a café / farm shop & had a coffee & an ice cream while the proprietor’s son told her all the things she was doing wrong – strange.

Back out on the road, there was a flash of yellow in the rear view mirror & Duncan & Alison caught up with me, which was better than driving alone, but by now my radio was properly playing up, I could hear them very faintly, but they couldn’t hear me at all. 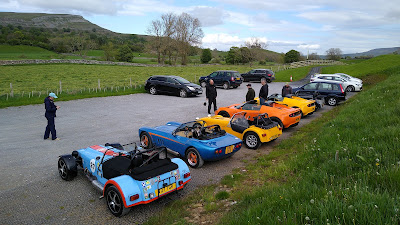 A couple of flags by the roadside indicated the place I’d marked as a refreshment stop in Wensleydale, so we turned round & went back, to find the three cars I’d lost already there, along with a young lady getting very excited about all these interesting cars appearing at her relative’s remote ice cream barn.
Three of us waited patiently while an old bloke ahead of us patiently watched the serving lady make up an ice cream, then told her that wasn’t what he wanted – a number of times, but when we eventually got our turn, my “apple crumble” ice cream was very nice indeed.

We were almost all back together as we got into some proper Northumberland upland roads & even through the poorly functioning radio I could hear Neil marvelling at the views, the excellence of the roads & the lack of anything on them. One more re-fuel & we rolled into Haltwhistle & into the hotel carpark, which meant getting the cars through that hole in the wall on the left, no problem for the Stylus, which is tiny & has a ridiculously tight turning circle. 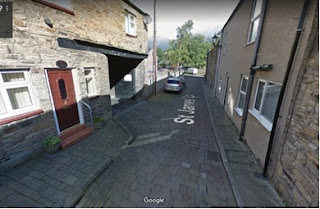 The hotel was very nice indeed with, nice rooms (I was given a suite!), very good food & a good range of beers.

A quick sum suggested the Stylus was doing 41mpg, which I was very happy with, but proper blatting would reduce the average a bit.

So, day one done, destination reached, all the cars running well.