On the road trip back in May, the conversation drifted round to top-fuel drag racing & some of the numbers associated with it. 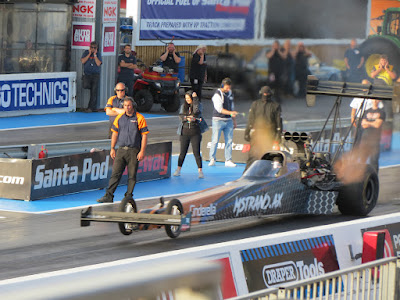 Like - if it could be arranged such that an F1 car at it's flat-out maximum speed passed a top fuel car on the start line, the top fuel car would get to the 1/4 mile mark first - by some margin.

Like - the ground physically shakes when the top fuelers launch.

Like a top fueler is the fastest accelerating thing-with-a-person-in that exists & I include space craft & the rocket sled things they use to test ejector seats with.

Like the car in the pic, on one run shut down the engine no more than 1/2 way along the 1/4mile - it still passed through the trap at 4.1sec.

The first pic was taken by Duncan, I was sitting closer to the start line & couldn't get a moving top fuel car in frame.

This omission was clearly something that needed correcting, so a little research was done & the euro finals at SantaPod was chosen as an event that would showcase the world of going-in-a-straight-line-very-fast - and it did it in spades. 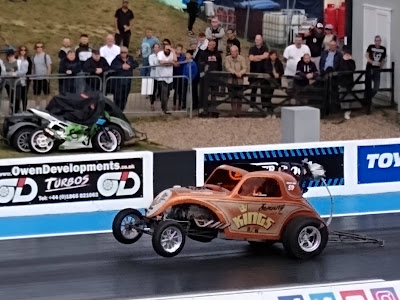 We went on a qualifying day to avoid the crowds - the point after all was to see the spectacle not to find out who won & there was a mixed bag on offer from "Street Eliminator" where the cars have to be street legal & run on road tyres, through a number of classes & on up to the "funny cars" & top fuelers, with the odd two seat rail car giving passenger experience rides & jet cars thrown in. Also Children's dragsters - yes, they're a thing. Rail cars with 90cc Honda "step-through" engines tuned to - are you sitting down - 80bhp & piloted by 10 year olds running an 1/8 mile in 10sec at 80mph. Imagine you're ten, you go to your friend's house & they show you the dragster they ran at SantaPod last weekend! & don't think this was all boys, oh no, at least 1/3 were girls & good on them I say. 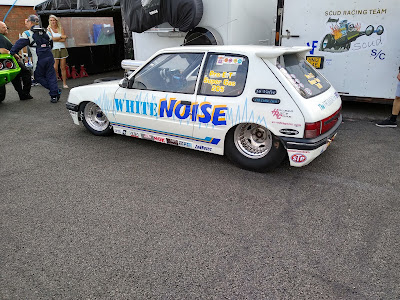 One thing I was pleased to see - a Tesla, presumably running in Street Eliminator (though I'm not sure how you'd get round the standard pump petrol requirement), got resoundingly thrashed. 11 1/2 is a good time for a road car, but not in this company, I say this because people had put HUGE effort into preparing cars for the event, if they could be beaten by some bloke with a fat cheque book, that would be a sad thing. As is is, when he goes to the golf club & someone says "how did you get on at that racing thing" he'll have to admit to being beaten by a Transit Van. 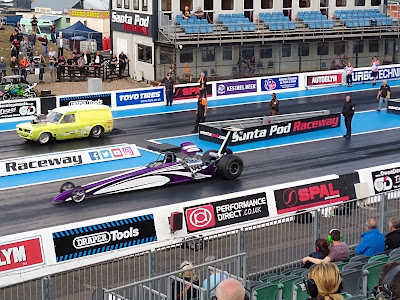 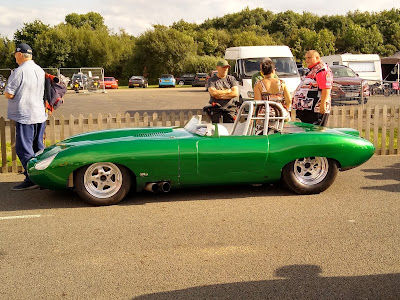 Yes it's an E-type dragster - what of it? 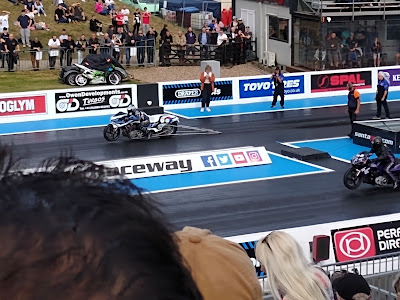 Then today I was back on the Stylus. Let's recap:-
The engine's badly overheated, the alternator pulley is cut up, so today - I covered the dashboard with vinyl. There was method though.
I patched the cooling system back together, mounting the rad an inch aft of where it was & putting the electric water pump in a more sensible place, but on switching on the ignition there was no oil light. I spent ages tracing wires & checking continuity & in the end came to the conclusion that the oil & battery lights were cross-wired so with the alternator off the car there was no oil light rather than no battery light - in my defence, both had been wired with blue wire, but as the dash was entirely out of the car, it made sense to do some other jobs, like making the left indicator warning light work with the left indicators & swapping the 12v & USB ports & - covering the dash in vinyl. It does look nice - but then I should like it - it's almost identical to the Fury's. 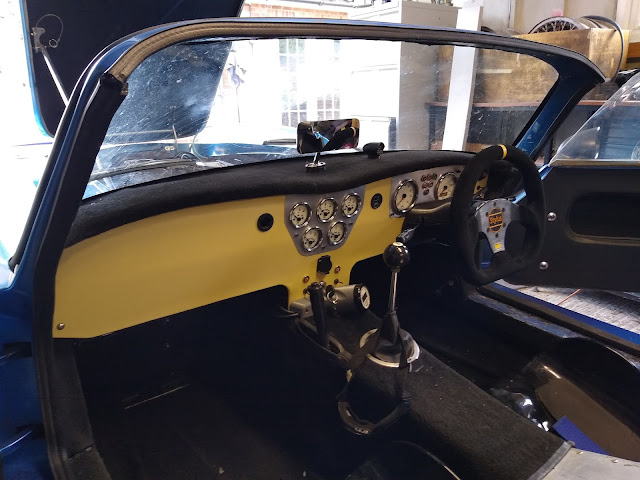 But the big news is of course that the engine WORKS - ish. Before it "ticked" from the cam box, now it ticks louder. This is not good & I'm seriously considering buying a replacement engine. Also the electric water pump which I really can't see the need for, is now leaking, so do I but a new EWP, or do I buy an Escort pump & go back to mechanical, or do I use the Mondeo pump that came with the car & rig up some means of adding a pulley so the pump is driven off the back of the belt?
I have no answers yet.
Posted by BlatterBeast at 20:18