I made the decision that it would be wise to buy a spare engine, Zetecs are now of the age where thousands are scrapped every month & the engines aren't going to get any cheaper, in fact they are going up in price fast. I looked on Ebay & found one for £450 not to far away, then another for £395 a little closer, then this morning there was a listing for four of them for £375 each on;y five miles away. I hitched up the trailer & went looking. The chap at the breakers was on the phone so I poked around the engines, the oldest had the fewest miles (around 2000 (year) & 95k miles) I've known people put 120k Zetecs in kits & they still go like a rocket, so 95k was OK. 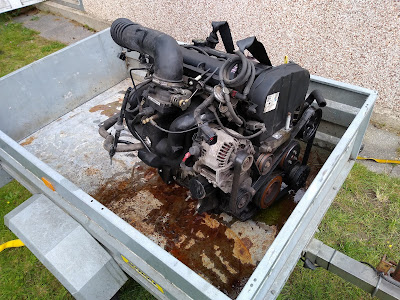 Then the guy came off the phone & I talked to him & he pointed out another engine, again y2k, but with 66k miles, I've checked the MoT history & yes, it's done 3-4k miles a year all it's life. So I've stripped the gubbins off it (power steering & aircon pumps & alternator), cleaned it & now I need to look into what I need to do to convert the car to blacktop, it's not much, but it'll take a while
Posted by BlatterBeast at 18:23