I slept well in spite of the warbling woman singing next door to the hotel (an event which caused a certain amount of “Waltons” style inter-room conversation over whats-ap), we breakfasted & - always a bonus - the car started. To be fair it always starts when it’s cold or warm, but if it’s got hot the starter turns only slowly, so as a precaution I was firing it up early in case it needed a push. 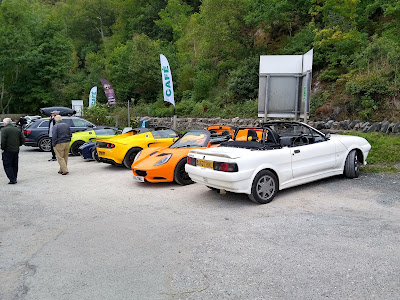 First on the agenda this morning was Horseshoe Pass & we got a clear run at it which is always a good way to start the day, but pretty soon we ran into some closed roads, which generally shuffles the pack as people take their best guess as to whether to follow the car in front, take a chance that the road they’re on isn’t the closed one or follow the Sat-nav. But we more or less all arrived at the Conwy Falls Café, more or less at the same time & hade coffee & of course cake (I like cake). The weather was fair & we sat outside taking in the scenery. 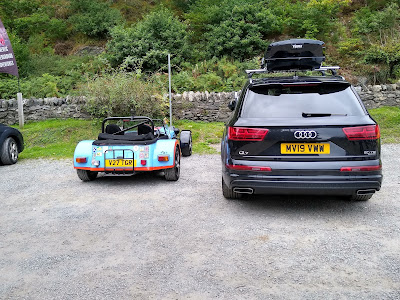 After refreshment we headed out into the wilds of Snowdonia, which involved the Llanberis Pass. It is very scenic, but it is also prime tourist fodder & we crept down the winding road at 10mph behind an enormous coach that was taking NO chances. Fortunately it turned off at the Snowdon mountain railway & we then had clear roads for a while. 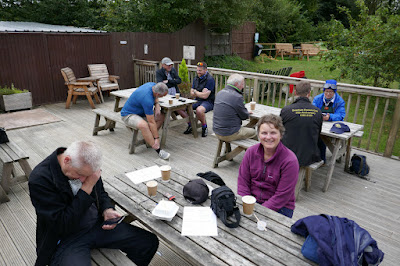 >> Myself (bottom left) always the epitomy of sartorial elegance (thanks Duncan). 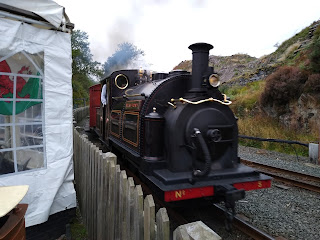 Next up was the railway station at Ffestiniog & more cake. Again we may not have all been there, but most of us were. On arrival we noticed a green Caterham in the car park, now usually “Catering Van” owners are somewhat aloof, many refuse to refer to their cars as kit cars & don’t acknowledge us other kit drivers when out on the roads. But this chap was chatty – perhaps because we inadvertantly boxed him into a corner in the café & talked at him. Like us he’d come from the east for a meet / run & had called in for refreshment before wending his way home via the midlands. 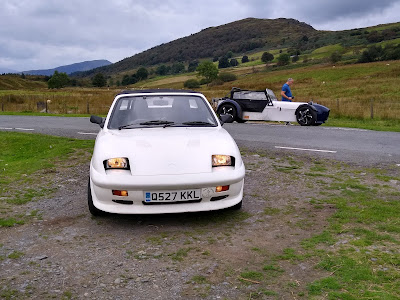 After that there were a number of split ups & re-forms as closed roads saw people re-plotting the route on the hoof & met each other coming from unexpected directions as we passed through Porthmadog, Harlech & Barmouth, skirting the coast southward.

So eventually we turned inland & returned to Llangollen, where once again the car park was rammed full, but with just enough space for us to park up for the night. Some of the group went out in search of curry, the rest stayed in the hotel, but our illustrious leader was struck down with illness – would we be a complete group the following day?? (Always good to end on a cliff-hanger).