So, off on the Rogue Runners autumn adventure.

With the Stylus suffering, it was down to the Quantum to do the blatting for the secnd year - but this time with about three times the power, but not much development - the trip was actually more miles that it had travelled with the new engine, so there was a little jepardy.

I was awake at 02:00, so was well prepared when the alarm went off at 03:00. In fact I was the first to arrive at the meet point at Newlands Corner & Graham – usually first to arrive for everything - was last. So as four of us were gathered, we headed off into the night. We travelled by back roads & eventually wound our way up to the Severn bridge without attracting too much attention – but that was about to change. 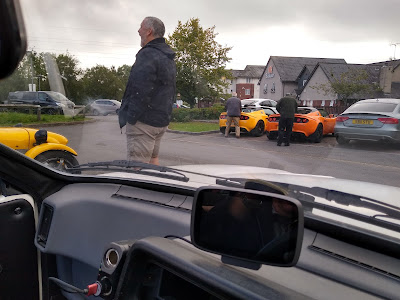 The breakfast stop was friendlier than last year & all went well until while leaving, Graham comented on a particularly large speed hump having a scrape on it left by his MX5 a few years ago, seconds later I gave it a new scrape with the Quantum, what I didn't immediatly realise was that it had pushed the exhaust backwards. I realised that when I pulled out on to the main road & it separated completely. 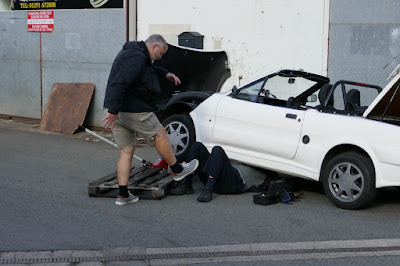 A few (noisy) miles down the road was a petrol stop with (thankfully) an old-school garage who leant me a very large trolley jack & with the help of a stray pallet, the end off a concrete gate post & assorted Rogue Runners I was able to lift the car a foot into the air & move the exhaust forward, tighten the rear clamps & re-fit the front joint where it had separated.

No lasting damage then – phew. But how often on the trip would I have to do this??

The next few miles would be more relaxing, but I was VERY careful over any humps we encountered.

There were the usual shenanigans. At one jungtion I was about to turn left over a bridge, the radio crackled into life with someone saying their satnav was saying straight on. While we discussed this Graham & Roger appeared from the other direction entirely. We had all bases covered. 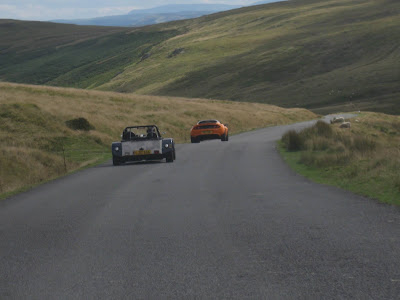 We were winding up through central Wales which seems entirely bereft of any coffee shops, garden centres or other sources of refreshment (by which I meant cake), so it was a very thirsty group that sat in traffic for fifteen minutes only 100 yards short of our hotel.

As ever, parking was “an issue” at The Hand in Llangollen, but we all got parked up & headed in for food & beer & chatter before bed – only to be kept awake by the music & singing from the establishment next door.

But day one done, we were all in Wales, all the cars were wor
king. Bring it on!