Yes, yes, I know this seems to be taking an age, but the throttle bodies are nearly finished - as long as the engine starts when it is finished.

The majority of the reason it's taking so long is that usually I have a clear plan & drawings - often a CAD model of what I need to make or do, this time apart from working out the lever geometry in CAD, I'm winging it - making it up as I go a long, so parts have been scrapped, re-modelled, changed into other parts & slowly (very slowly) a working system is emerging from the fog. I've also taken the opportunity to improve things as I go. 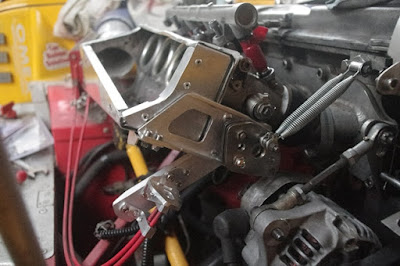 I've trimmed all the "flags" which will become levers on the throttle bodies, I've lowered the airbox so (hopefully) it won't rub on the underside of the bonnet, that meant trimming all four trumpets to clear the airbox top skin. I had to re-make the cable mounting as I realised the bonnet would foul what I'd made, fortunately work was having a clear-out & several exquisite lightweight machinings were being scrapped before I liberated them & was able to work them into the new cable mount design - which is better than the old one in a number of ways.
I've also modified the pulley to take a longer return spring mounting so I can fit two return springs, so (assuming the enjoined works), I won't have a repeat of the "stuck-wide-open-throttle-on-the-M25" incident from this year's Rogue Runners trip.

I'm now just waiting for the arrival of the turnbuckles & I can set up the main shaft, drill & trim the levers & adjust, fit the new cables & go for the start.
Posted by BlatterBeast at 22:00