There’s been a lot of garage action over the festive period, but not a lot worth photographing I’m afraid, here’s a sort of list:-

Chassis – all the cleaning, de-greasing & painting is done (bulkhead forward).

Front Suspension – cleaned, de-greased, painted & re-installed. I have a query in with the shock manufacturers as there’s no lock rings on the lower spring pans which doesn’t seem right.

Brakes – Cleaned ready for reinstallation, but with the smaller discs & the spacers under the callipers removed the pads overhang the discs by about 5mm so I need to get the mounting brackets machined, I have a plan for this! 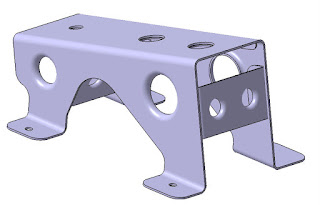 Brake reservoirs – The three reservoir pots (front brakes, rear brakes & clutch) & their bracket have gone, there will be a combined brake reservoir - crucially with a low level warning - & a separate clutch reservoir. I’ve drawn up the new bracket & a sheet of 1.5mm aluminium sheet is on its’ way. The final design may get "rationalised" (not be that posh).


Fuel lines – The two original ones remaining on the car are cracking & need to be replaced. 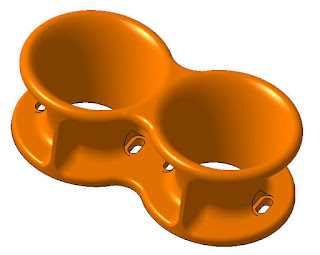 Throttle Bodies – The vacuum lines weren’t great so there’s new silicone hoses in the post. Also the trumpets / ram pipes / velocity stacks were parallel for most of their length with a flare at the end – which was just inside the air filter inner surface. I want to replace the air filter with an airbox & remote filter / intake, but for now I’ve drawn up shorter trumpets with a nice parabolic entry & the first pair is on the 3D printer as I type.

So the car is very much being re-built ready for the engine to go in when the aluminium bell housing arrives, hopefully mid January, there’s some fiddly bits like the brake calliper brackets & reservoir mount, but mostly it’s just putting stuff back & making sure it works.