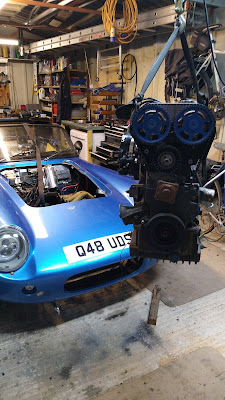 Today saw the beginning of the next project. The Silvertop Zetec that ran air-cooled for a couple of hours has come out of the Stylus & I've started transferring the worth having parts onto the Blacktop. First to move was the Raceline flywheel - must remember to put a bearing in the end of the crank! It had a paddle clutch which only has 1mm of pad left, so I think I'll put a conventional clutch back in.

There's no rush, while it's out I'll be cleaning the oil off the chassis, then the peeling powder coat & paint, treating the surface rust & re-treating with all the tools in the POR15 box, the cleaner, the metal prep (which I suspect is little more than salt water, though I'll not be tasting it to find out), then the POR15 paint, probably followed by Hammerite or somesuch. After that the chassis should be good until all the petrol runs out. 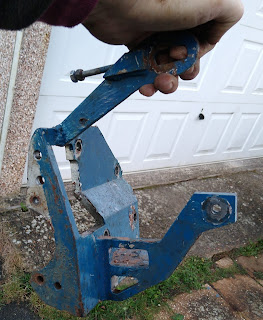 Still to get swapped are the Raceline sump & the die-cast cam cover, the coil pack mounting plate & one or two bits that will go on once it's installed. One thing NOT going on is the alternator mount. Partly because the alternator will be on the other side of the engine, partly because it's made from 10mm steel plate & weighs 3 1/4kg. It is HUGE, but I'm guessing from the way there's a plate that wraps round the front of the engine, that it used to mount something else when the car was supercharged.

In other news, the Quantum now has a flexi-pipe in the exhaust, I had to move the LAMBDA boss into the Y pipe under the engine - don't know why I didn't put it there in the first place - & it now drives very well indeed. I just need to sort out the starter motor & it's all done - kind of. There's "nice-to-haves" like the stereo still to fit, but I don't use it anyway, I'll only be fitting it to fill the hole in the dash. But it's a world away from when I bought the car & it wouldn't go into gear because the clutch pedal hit the floor before it disengaged, if you could get it to disengage the gear shift was so sloppy there was no telling what gear you'd get, there was next to no power & these were good things because if it did get going the steering was too stiff to steer with & the handbrake didn't work. As well as some more minor faults. It now keeps up with the Elises on a Sunday run, so I'm quite pleased.