In theory today’s job should’ve been more chassis cleaning, but as we discovered yesterday, I’m easily distracted from such things & indeed that was the case today.

First there was finishing stripping the engine mounts & putting them through the parts washer, then I took the silver top off the Silvertop (the cam cover) & swapped it for the black top from the Blacktop. Having started on the engine I carried on, fitting the coil pack mounting (one of the holes I’d used is the ONLY one that’s in a different place between the engines). I also swapped the oil pressure senders over which require removing the new alternator mount to trim a corner off – which was a good thing because I noticed it didn’t quite sit down flat, so I put a couple of washers under it to fix that & drilled & wire-locked the bolts for good measure. 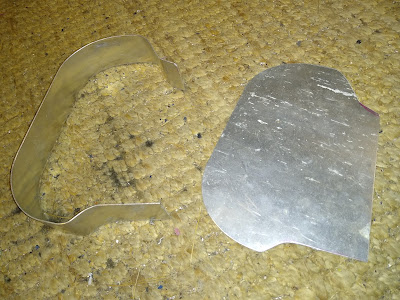 At odd times during all this activity I put some primer & then satin black on the engine mounts so they are now FINISHED. Though I realised the holes in the block I need to use to fit the mounts have never been used, so I had to slot a bolt & use it to clean out the threads. 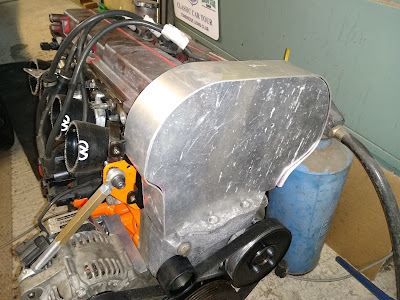 Then I stood back & looked at the engine & the cam belt cover stood out as being the only bit of plastic left on the engine, so I started making an alloy one using a slightly improved design to the one I made for the Fury. 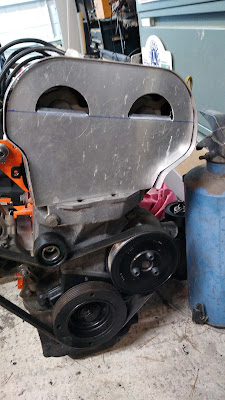 So where do I stand?

The engine is all but done, just waiting on the clutch plate, the sump gasket (both in the post), the cam belt cover needs ½ a day to finish it, then the Silvertop can go into long term storage, the Blacktop can go into a corner & I can raise the car on stands to carry on with the chassis & begin the suspension.

And there it is - the happy engine >>