Having decided to change the engine because I ran it air cooled for two hours (it still started & ran) it seemed sensible to bring forward the chassis refurb I'd planned for next winter, but then the front suspension would ideally need to come off for access, so why not clean & paint that at the same time?

Actually, if the front suspension's off, why not modify the brakes to allow the 13" wheels I'd like? Although as there's now air in the brake lines, I may as well swap from the three reservoir set up (front & rear brakes & clutch) to a combined reservoir for the brakes that allows a low-level switch - reduced weight, added safety - win/win.

But while I'm messing with the hydraulics I could take out the piece of rigid pipe from the belhousing to the clutch slave cylinder - it does nothing & is just more weight & potential leak paths. 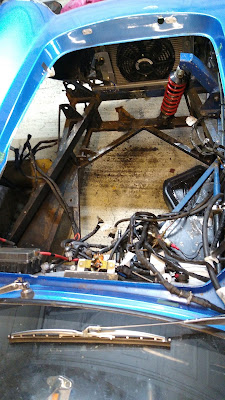 OK the front of the car's looking pretty bare now, but there's a shelf under the off side wing with a fuel swirl pot, a pump & two filters on - it's in the way of chassis cleaning & really - I'd like to rationalise it a bit, but with all the components out of the way, I find it's held in by bolts - I'd assumed it was originally a welded in battery tray. So now I can take that  out & strengthen it as the swirl pot's always moved about.

The upshot of all this over-thinking is that there is now nothing else to remove forward of the front bulkhead & I have a LOAD of work to do. The near side front suspension is all cleaned & painted, I have new brake lines for the front too & I've established that I can use the calipers on the car with Capri 2.8 front discs to allow 13" wheels. The near side of the chassis is all stripped of paint, powder coat & in some places underseal, de-greased & ready for prep & paint with POR15. When that's done I'll re-fit the near side suspension & start on the off side, as well as cleaning & de-greasing the rest of the chassis. After that, I have to make something sensible of the fuel system parts & make a new hydraulic reservoir support bracket, Re-fit the brake lines, drop the new engine in & get it rolling-roaded.

It'll be like a new car - IT DAMN WELL SHOULD BE!! The only things I won't have touched will be the rear suspension, axle & brakes & they are all more or less new.