The car has been getting worse, more reluctant to start & unning worse when it did. In an act of desparation I bought a new Crank Position Sensor - another £25 wasted.

I was just about at the point of scrapping it - there are other things I want to do with my life, but for wont of something else to do I was checking over some of the basic electrics. In the past I've wired thigs up to an Aux circuit (on with ignition, OFF with the starter) so I was checking I haden't done that with the ECU. I'd put a battery tester across the switching side of the relay to check this, turned the ign on, the lights on the tester lit, I turned off the fuel pumps to inhibit the engine, turned the key to start & the engine fired & settled into a perfect idle - then stopped. I took the tester off, it wouldn't run, I put the tester back on, it ran.

THIS MAKES NO SENSE! I was just testing the voltage across the switching side of a relay.

I went indoors to have a think.

This morning I retried the experiment & while it wasn't as clear cut, it still seemed to hold good. The engine would still only idle for 30 sec or so, I took a new wire from the fuse box to the engine relay panel & stowed the old one. I also swapped the relay for an unused Ford one from the fuse box. I'd also made a change to the fuel plate, fitting the Low Pressure fuel pump the other way up - it really shouldn't care, but somehow it sounded happier. I also re-loaded the map Omex sent me (+ the changes I made to calibrate the sensors) it sort of started, then I remembered that Guy at Omex had suggested upping the fuelling rate, by re-loading the map I'd restored it, so I re-set it, turned the key & the engine sort of ran, stopped, turning the key again made it run better, pushing the throttle made it gasp & stop. Turning the key again had it purring like a kitten - at a perfect 800 RPM. 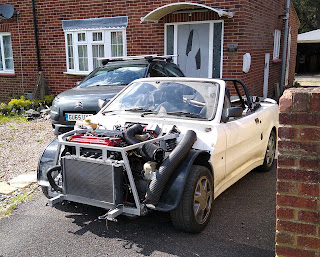 Who knows what the problem was - my guess would be something in the relay or the supply to it.

But there it is, the first time it's moved under it's own power for over six months - & 4 of those months were spent trying to get it to run properly.