An early but excellent breakfast at “The Glen” set us up for the trip ahead & we set off northward. I should’ve offered to take the luggage bags for the two people travelling in a seven, but I don’t think that fast I’m afraid. I did flag them down after a couple of miles & asked if the rivets were holding (which they were). After that I was at the back as we made our way up through the Cairngorms, the spectacular Glen Shee (thank goodness all the coaches & campers go to Glen Coe!) where there was plenty of snow on the mountain tops. Again I got separated from the others, I put out radio calls from time to time & occasionally was answered with a burst of static, but by now it was mid afternoon & I hadn’t had a drink since breakfast, so convinced I was the last car, I pulled over at the top of Glen Shee where there is a Ski base camp which probably looks fantastic covered in snow – less so with a muddy gravel car park.

I found my mask & walked in & joined the queue, idly looking at the pictures on the walls, the cake selection, out of the windows – wait – a flash of yellow? All my travelling companions went past in a train.

I went. Sprinting across the car park I grabbed the spare radio & reported my presence, started the car (so the normal radio worked) & headed out after them. There was now a frustrating ½ hour or so where I could often see them across a valley, but there was always a car holding me up. As soon as I could overtake I'd see them across the next valley & they had found an overtake opportunity so
I was now stuck behind the car they had been stuck behind. 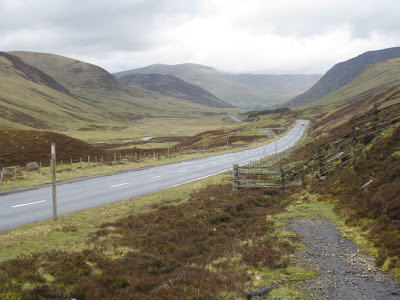 One advantage of using the smaller roads is we usually turn off an A road after a few miles & so it was here & I was able to catch up. We stopped at the top of a pass as the guys in the Sevens needed a break – it was 4 degrees with large banks of snow in the hollows at the roadside. After chipping off the icicles & re-animating they climbed back aboard & we set off – within 5 mins we’d dropped 1000 feet & the temperature was a much more acceptable 9 deg.

The clouds were heavy & threatening, but it stayed dry, the moorland was absolutely ablaze with yellow gorse, but little of the purple flowers we’ve seen in previous road trips – I guess it’s been delayed by the unusually cold May.

Coming down off the Cairngorms, we passed through Inverness, over the bridge & by normal A roads into Strathpeffer – our base for the rest of the week. The “Ben Wyvis Hotel” is a grand Victorian building in a grand Victorian spa town. I chose it for it’s large car park away from view (as well as being cheap & available). It’s clean, warm & dry & the staff are really attentive & helpful, but there is a slight whiff of the Fawlty Towers about it which might be charming or not, I haven’t quite decided yet. The building is properly over-scale though with the ceiling in the dining room being 20ft up with windows & fireplaces to match. Very grand. 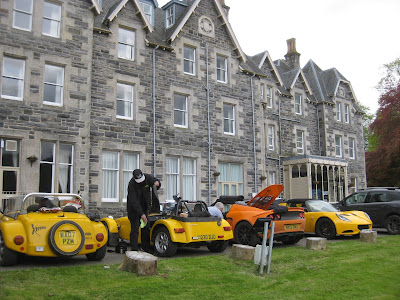 So we had arrived. There were a few repairs to be carried out, SatNavs had become detached & the Seven that hit the pot-hole on day one had another ominous squeak – I put my head under it while I was bounced up & down bu could see no obvious problems, so bar – tea – bed.
Posted by BlatterBeast at 17:10