Again, something a bit different today. With Linda’s car out of the running with a dead fan (Car Builder Solutions saved the day by getting the new one to us in Strathpeffer from Kent in 22 hours), I had a passenger - & what’s more, a lady passenger who didn’t grab the seat bolsters every time I went round a corner! I had written a route that went north to Thurso, west to Durness, then south to Ullapool & finally east to Strathpeffer. There was also an option of fitting in the “clashnessie loop” the bikers had recommended, that we’d failed to do yesterday. One of our Number had shortened the route (which is a good thing, the routes are just suggestions) & three cars would be doing each.

Sounds organised - sounds like a plan, yes? It lasted until we got to the end of the hotel drive when one group went right, the other went left, round the back streets & returned to the hotel. It turned out that I’d asked the SatNav to take me to the start point of the route which was in the car park – after we’d left the car park.

Oh how we laughed.

We caught sight of the others on a A9 where a long tailback of cars & lorries was stacked up behind a solitary cyclist. After a while the SatNav said “turn left”, shortly afterwards  three cars arrived at the Lairg visitor centre, then another one, then that one went away & returned with a fifth. The sixth had missed the turning & eventually went on to have a nice day at John’O’Groats. 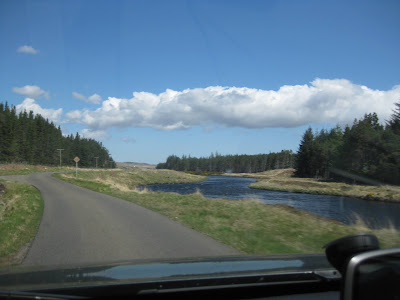 Soon after Lairg the Lotus’ went off on their own route while two Sevens & a Cactus headed due north, hitting the coast at Thurso. The weather was improving & Linda used my pocket camera to take photos from the car window – often of signposts & trees as it’s an old pocket camera & the shutter-lag is “noticeable”.

Having rolled along the North coast for a while, we reached Tongue & stopped in the Tongue Hotel for a drink. “Sorry” said the receptionist “we don’t do just coffee”. Slightly miffed as well as thirsty we moved on to Scourie – a lovely spot with a caravan park overlooking a tiny harbour & a beautiful bay. It has a coffee shop which sells lovely cakes – when it’s open – which it wasn’t. By now the “miffed” at Tongue, was definitely moving towards the “disgruntled”, but we walked up the road to the petrol station which did want to sell us some refreshment, but all they had was fizzy pop & chocolate, which just wasn’t the same. 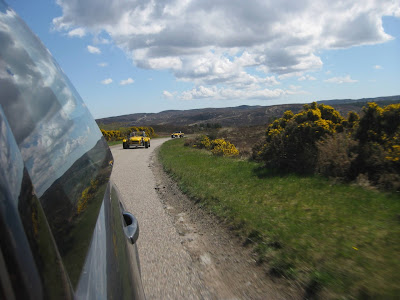 So again we headed south, over the magnificent Kylesku Bridge. Deciding not to do the loop the bikers had suggested we continued on what must surely be one of the best driving roads in the world. Wide & smooth with properly stunning scenery, I’ve driven it a few times before & always in warm sunshine. IT IS GLORIOUS.

As we approached Ullapool, Linda – who had been taking photos of trees & signposts (I’m being unfair, all the photos in this episode were taken by her & they’re much better than mine – but some were of trees & signposts) announced that the camera was out of battery. 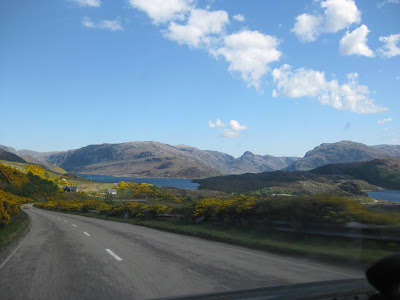 On arrival back at the hotel, the new fan had arrived, so I quickly fitted it to Linda's car – almost forgetting to re-connect the front winkers – tested it & we’re all sorted for the journey to Selkirk tomorrow.

Except that I’m going to Balfarg to visit my son & his family. 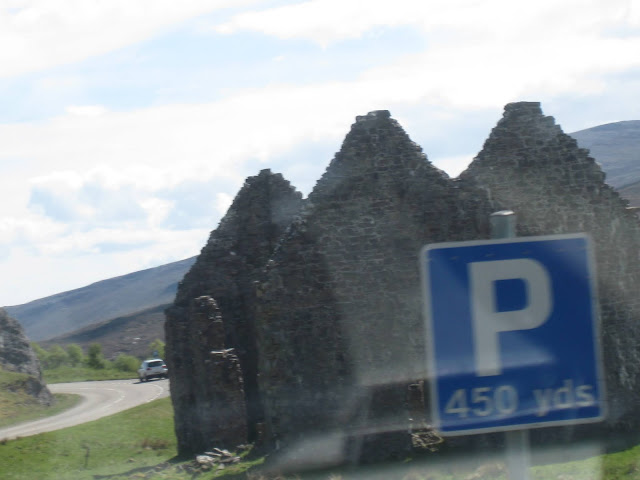