It was drizzling a little as we prepared the cars, some elected to go hood up, some hood down. Me – I was optimistic & opened the back windows. We set off & almost immediately ran into a rainstorm of epic proportions (again). We headed east & found the A9, heading up the map, past Dunrobin Castle – which frankly I’d assumed to be a literary joke & also past a large number of presumably disused oil rigs stored in the estuary.

We refuelled (well, I didn’t – I was still showing a range of 380 miles) then headed again up the coast, at this stage I was second-to-last playing the role of camera car when the lead driver – who at the time was looking out for a café as we were all a little parched – turned left off the road & called over the radio “I’m not sure this is right?” but carried on - as we do. 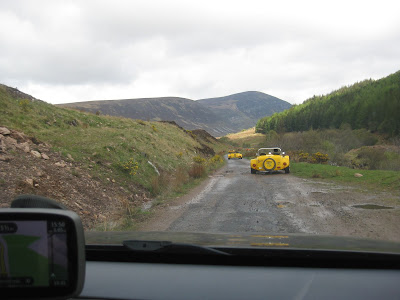 And with those words the adventure began.

Strictly speaking it was a road. It’s shown on a map, it had tarmac, it had edges & a direction, but there the similarity with the technical term “road” ends. It had potholes you could lose a sheep in, it had grassy mounds in the centre that in some places would qualify as an arable farm – or at the very least “Sites of Special Scientific Interest”. We discussed going back, but as what passed for a metalled surface was barely wider than one of our very narrow cars – that would’ve involved seven cars reversing back on to an A road. So on we went, and on. After about four miles we were rewarded with magnificent views 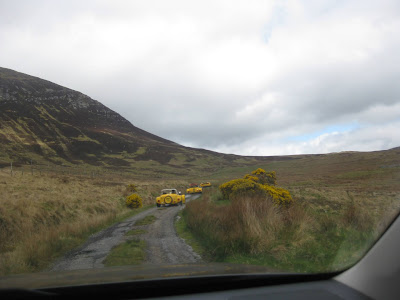 – which was nice, but one of the Lotuses was dragging its’ front number plate under it – which wasn’t. At this stage the fear was that this “road” went all the way to the north coast, but one of our number noticed that down in the valley – a couple of thousand feet below – was a van travelling at a decent speed, so there was a road a fair bit better than the one we were on. Zooming the SatNav out suggested that yes the thing we were on would meet a road worthy of the name, so after taking in the magnificent views, we carried on. This time I led on the basis that the Cactus has more ground clearance & was obviously expendable. 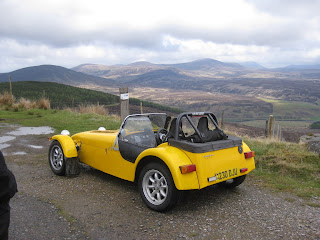 Sure enough the road meandered its’ way downhill to join an “A road” – hoorah!

But this was the very north of Scotland, so the “A road” was single track with passing places, but that was OK because there was no foliage on the centreline & the tarmac was almost entirely flat & in fact, present.

It is possible that I selected this as a route, but I do tend to check what I’m calling up, so it is perhaps more likely that the SatNavs decided that as the track cut off a corner, it was a better option.

It wasn’t. But, what’s a road trip without an adventure? 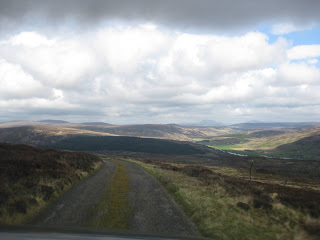 So, we were now on a seldom used road that ran for 20-odd miles & we were still in dire need of coffee. We passed many places offering eggs for £1.30 per ½ doz, but nowhere offering to combine them with flour & sugar & serve them with hot beverages. Eventually the road met the NC500 at Thurso, so surely there would be no shortage of refreshments. There was, we’d travelled another 15 miles & stopped at a couple of promising looking – but closed – places before we got to Bettyhill where there were at least three such establishments.  Arriving at the very nice Farr Bay Hotel, we were initially flummoxed by the parking arrangements, but after circumnavigating the place, we found a way into the car park. It was a small place & we must have made up 75% of the clientele, but it all looked very nice & we placed our order for cake & coffee, which arrive after only maybe 50 minutes. By now the sun was shining brightly & it was warm – proper tee-shirt warm. 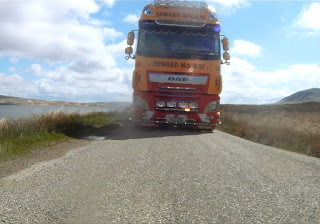 Having supped, we climbed back into our cars & pointed them west along the north coast to Tongue where we turned south onto a little used north / south road. Normally it’s little used, today we came up behind an artic almost straight away. After a while it pulled over to let us past & we gained some speed, but shortly after that we encountered an even bigger lorry, carrying a tracked digger overhanging both sides coming towards us. Manoeuvring past this leviathan was a challenge, butwe made it. After a while we realised that the two enormous lories would soon be meeting face to face – someone was going to have to back-up, maybe all the way to Tongue. 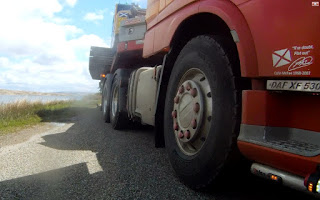 But looking on the bright side, we now had 35 miles of twisty road to cover & it was a joy! Smooth, with plentiful passing places, constantly changing direction & elevation with sunshine & fantastic scenery. It had to end & it did, at Lairg where we re-fuelled & headed towards Ullapool. Again the road was single track, but hugely enjoyable, but storm clouds were gathering – literally.

As we passed through Elgol heading for Ullapool the heavens opened. At Ullapool we turned towards Inverness & there was a brief respite from the rain but it assailed us again in waves. But it wasn't all bad news – I had a steel roof & glass windows, so was warm & dry. 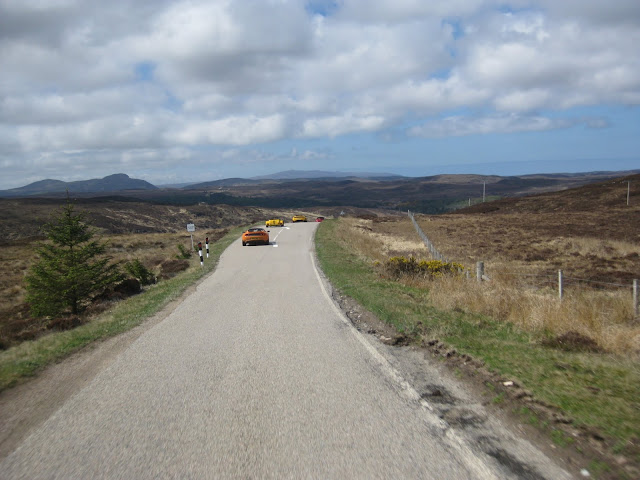