Today was a good day. After breakfast with the guys I'll be travelling to Boscombe with, I started on the Fury. The Waxoyl was ladled about & the wishbones, upright & drive shaft were re-assembled with the shock absorber, all the bolts were treated to a little waxoyl, but not tightened until the car is back on the ground. As I may have said, the brakes were stopping me re-assembling the hub & fitting the wheel, so I moved on to the fuel tank.

I connected up the new fuel return line & the wires for the ign-live & earth for the level sender & lifted it into position. Fitting the nuts onto the tank fixings is always a hassle, but it is at least do-able which wasn't the case the way it was supposed to be arranged.

It was now time to move on to one of those jobs I wanted to do to from the outset. I shortened the fuel tank outlet pipe & fitted a three way junction, two 12mm & one 8mm. Obviously the two 12s take the main fuel supply, the 8mm joins to a copper pipe which passes though a stop valve & a stop-end behind the rear chassis member. The plan here is that next time I need to drain the tank I can remove the stop-end & put the pipe in a jerry can, remove the panel under the diff & turn on the fuel cock. Proper control over the draining, but if some joker thinks they can steal the petrol by opening the stop-end they'll meet with disappointment as the cock will be off so they'll get nowt. 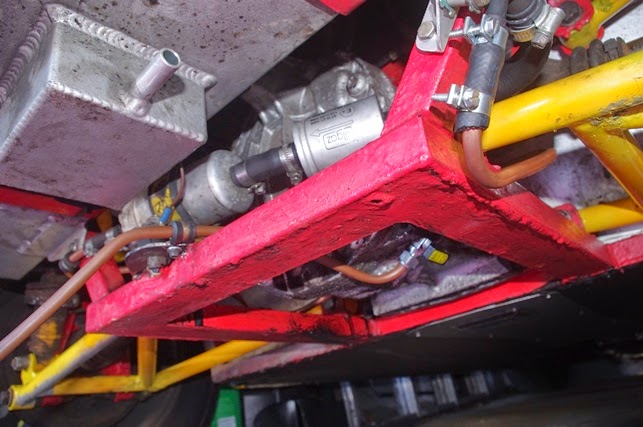 Right at the top of this pic, you can see the tee piece with a large hose passing inside the diff cage to meet the filter & pump. Coming down is a joiner hose & an 8mm copper pipe which goes forwards & inboard under the diff, through the stop-cock (you can see the yellow bit on the handle) & then out of the back. I've now cut the bit at the back down & fitted the stop-end.

So I'm now waiting for the brake slave cylinders to arrive & I can finish the car off ready for a club outing to Brands Hatch next month.
Posted by BlatterBeast at 11:24