A Morning with Craig David

OK, a morning with Craig AND David. Having discussed with David (owner of the Mango Fury) the possibility of a blat, a posting on the SKCC forum entitled “Too Fast, Two Fury……..s” enticed another couple of members not heading for the kit car show at Detling, unfortunately one dropped out, leaving myself & the aforementioned Craig & David. 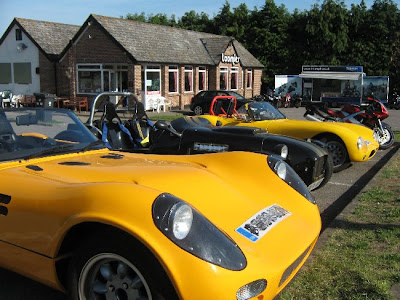 Gathering at the total Garage at fleet in the early early morning, we headed off at a brisk pace for a tour-de-Surrey. It was a bright morning & the travelling was good, but an abundance of traffic on the later stages limited our fun. We breakfasted at “Loomies” a fine roadside establishment oft frequented by the SKCC, at first we thought it was closed as there was a lorry parked across the entrance & our stomachs cried out in anguish, however we were not to go hungry, the lorry was delivering a Triumph advertising crew who would accost bikers as they went about their feeding rituals during the day.
While we feasted, a chap approached & requested tools. The throttle cable on his MGB had broken (presumably with the strain of trying to get it over 50mph), he had wisely bought a spare, so it was mended in a trice. While he had his head under the bonnet, he said to the chef (who had wandered out) “big meet today?” which I thought was rather a personal question until I realised he'd said “meet” and not “meat”. 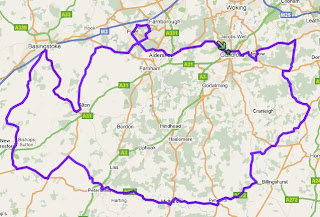 Anyway, after rescuing the Morris-Oxford-disguised-as-a-sports-car (can you tell I’m not a fan of the MGB?) we headed off, only to find most of the white vans in the south east – one at a time - generally in front of us. On the homeward leg we were rumbling along behind a Volvo off-roader thing when the road went dual – so the Volvo pulls into the overtaking lane & stayed there. Mr Mango showed remarkable restraint in not undertaking it but I noticed as we arrived at that other Mecca of things mechanical & full-English like – Newlands Corner – that the local Police chopper  flew low over head, had it been following us?  My suspicions were further roused when within two minutes of us arriving a patrol car pulled in & cruised round the Three Must Blatteer's cars, "Oh cripes" I may have said under my breath, but in the best traditions of highway police, he was only interested in the cars.
This video
http://www.youtube.com/watch?v=r4YwRYjK7FM Was put together by the SKCC for the Detling show & gets what it's all about across rather well.
Posted by BlatterBeast at 22:27