Well the time has come to reduce to being a one kit car family. The flying Fridge is going for a new life in Yorkshire. I'll miss it, but between Mrs Blatter & I we now have four cars, three of which are convertibles, which seems excessive, we also have my in-law's car on the drive most of the time.

The last thing to do before the Fridge went was to swap out the "reluctant" five speed gearbox for the known good one in the Fury - which has a posh close ratio one on order, so the Fury currently looks like this:- 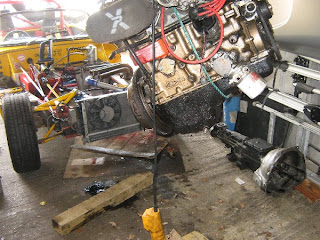 I've been promised the new 'box in the first week of next month, so I'm hoping they're as good as their word. I shan't name them until I've got the 'box back just in case I need to curse them. As well as changing gearboxes & driving kit cars to Yorkshire, I'm also fitting a kitchen, so I'm rather tired & stiff at the moment. Eagerly awaiting my new parts & getting the car back on the road theough.
Posted by BlatterBeast at 18:34