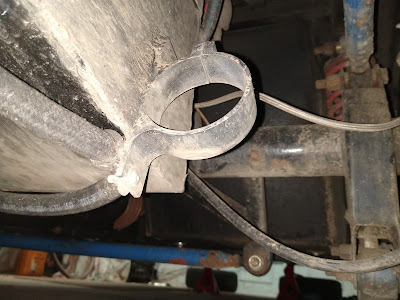 It's an old adage, I've seen it attributed to many people - but today it was me who said it. I've mentioned the car's original fuel tank before, it was clearly designed for fuel injection with a "sump" in the bottom face, but as it's a live axle car, there was nowhere to mount a high pressure pump at or below the tank lower face. So the builder fitted a low pressure lift pump & a swirl pot. I'd already reconfigured this system to remove a couple of fuel filters (it had five) & move one to protect the injectors, but when I designed the tank, I had a bracket welded on to accept a high pressure pump. 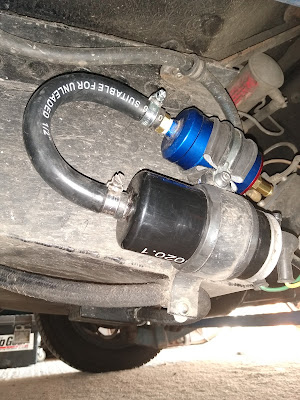 Today I reconfigured the system again to the layout I want. The low pressure lift pump & swirl pot have gone along with four lengths of hose & eight hose clips, so there are less leak paths, there will be fewer electrical runs & the car is about 3 kg lighter.

I've done a few other little jobs today, just a couple of things that needed looking at as the car's done 7,200 miles since February with very little maintenance.

I'd notice a couple of times on the road trip a shriek from the alternator belt when the engine fired & sure enough the belt was a little loose - I shortened the adjuster & it's pulled it tight again & I've looked into moving the screenwash bottle to where the swirl pot used to be to make it easier to fill, but that's a job for another day.

I've ordered the poly bushes for the rear suspension & also a set for the front shocks, as all they had was a rubber sleeve & would "migrate" to one end & scrape on the rockers. Headed bushes will fix that. So, busy day & things in the post for the next jobs. Excellent.