A Breath Of Fresh Air

On my "pre-tour" tour of Devon a couple of months back, I found myself driving in driving rain. This was "an unpleasant thing".

The car has a roof & side windows (optimistically referred to as "full weather gear"), but there are problems. The weather is mostly kept on the outside where it belongs, but some wet creeps in & the windscreen steams up. The car has a demister blowing warm air over the screen & this works to clear it, but also heats up the inside of the car. The side screens open a little, but it's still quite sauna like unless you're going quite fast or it's proper winter.

A potential solution is to remove the side screen - I found I could do this from the driver's seat without too much difficulty, but the operation is fraught with the risk of dropping the retaining pin or the screen (or both), then if it's a downpour, the rain makes it's presence felt.

More options were required, so I ordered a pair of "cockpit vents" from the marvelous Car Builder Solutions people. When they are described as cockpit vents, they mean just that as these are an aircraft part used mostly on Cessnas & the like, but their use has also migrated to hard-core race cars. They pop into a 3 1/4" hole & can be closed, open facing forwards to force air in, or rotated aft to draw air out.

I asked my Brother if he had a fly cutter, but his pillar drill doesn't go slow enough for one, he did however have a suggestion. We could mount his router upside down under a board & rotate the screen about a pin to cut the hole. This sounded like a plan & had the side screens been made of Polycarbonate (or indeed plywood) it probably would've worked really well.

We set it up in his garage & I started cutting a piece of 5mm ply as a test run & it worked very well indeed, the ply broke right at the end leaving a bit of a chunk, but it had failed due to cutting through one direction in the grain. Plastic wouldn't do that obviously. 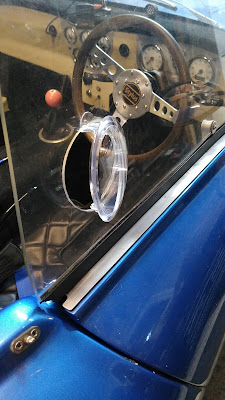 It didn't. It just melted and then it got wrapped round the cutter & heated up the rest of the screen.

We had another try. this time my nephew played air from the compressor onto the cutter to cool the area & I turned the screen the other way so the majority of the cutting & therefore the heat happened on the inner edge which was scrap anyway.

So was it an improvement? Yes & no. The cut was better, much more circular & the screen I would be keeping hadn't melted, BUT the cut plastic still melted & collected behind the cutter - where it welded the inner & outer rings back together!

I managed to saw through the "weld pool" once it had cooled & when I got home I broke most of the rest away with pliers & finishing VERY carefully with a sanding drum in a dremel.

The result was pretty pleasing considering how it had looked an hour or so before - that is the good - the less good one ison the passenger side, so I don't need to see it.