Back To The Engineering

The Stylus is now on SORN for winter mods.

The first thing to get my attention was to tidy up the last of the handbrake cable issues & see how it felt before re-engineering anything.

I'd already replaced a way-too-short balance bar with an aircraft flying control pulley so both brakes balanced properly, then just before the last road trip, I'd replaced a soft plastic pulley below the handbrake lever with another flying control pulley. But when I took the old pulley & it's nasty screw & assorted washers & cheap nuts off the car there was a large (15mm) hole in the trans tunnel, a 15mm ID tube on the inside & some kind of bung in the middle with a 6mm hole in.

Clearly the offset between the bung & the inner panel where the pulley was would mean the pivot bolt would bend when the brake was pulled, on top of that the bung turned out to be a steel bush in a plastic pipe, so even more movement was happening.

I went to my Brother's & turned up two "top hat" bushes in alloy, one with a 6mm hole was a snug fit in the large hole in the panel, the other had an M6 thread & would fit in the tube on the inside.

But crucially, because the pivot bolt was now properly supported, all the force from the handbrake lever would now go into pulling on the cable, not get lost in deforming the plastic pulley or bending the nasty screw.

Fitting it was a bit of a faff, but not as bad as it was before when I had to lay on the floor with one arm in the car turning the bolt & the other under the car holding a spanned in the transmission tunnel.
Once tightened up I pulled the brake lever & it now feels like it tensions the cable, then pulls the brake on & with six clicks on the ratchet I can't push the car along any more. No idea if it's now good enough, I need a rolling test for that & as I said - the car's now on SORN. 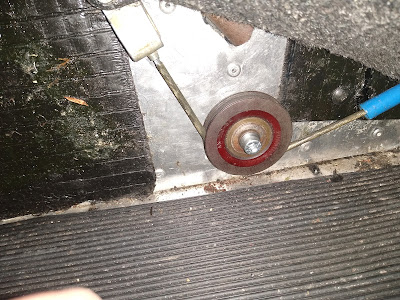 But I now know the mechanism is as good as it can get, so if it needs more I can drill the handbrake lever to increase the leverage, safe in the knowledge that all the power is going to the brakes. I may need to get a long button head bolt to swap for the cap head, but that's trivia.
Posted by BlatterBeast at 17:16