... Well - allow me to qualify that. The Stylus is NOT nearly finished, however the tasks I set myself to have it ready in case I needed to take it on the road trip to Wales are nearly finished. 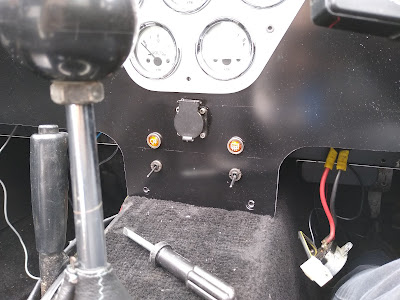 The dashboard is just waiting for the primary clocks - the speedo & rev-counter. The "Spitfire starter button" as they are invariably described on Ebay, is in & working, To be fair it is a Spitfire starter button, but it's just an Air Ministry standard part, so while it was used as a starter button on a Spitfire, the same would've been true of the Hurricane, Lancaster, Tiger-Moth & indeed anything else that needed a momentary switch. 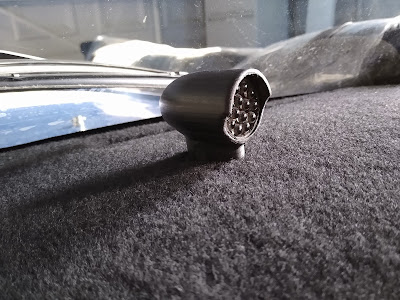 As the dash neared completeness I looked at the shift lights. When I got the car there were two of them on "trailing leads", I only wanted one & I wanted it screwed down. Putting it on a battery I found there are two arrays in each, a greenish yellow one & a red one, but couldn't find how they were wired until I realised that the ECU drives one set & the rev-counter drives the other, so the two arrays are sequential.

Having sorted that out it was a simple matter to draw up a dash top pod to mount the light in & print it. Sounds simple, but you're looking at the thick end of a day's work there. 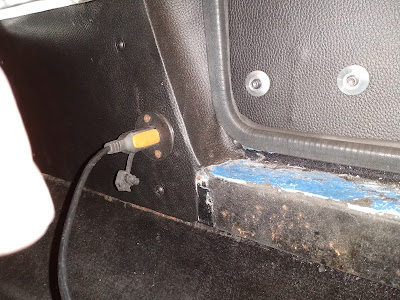 Simpler & easier was a charger point, as the car has the same type of small battery the Fury had, I've fitted a charge point for the Ctek battery keeper to the driver's side footwell where it's both out of the way & convenient at the same time. 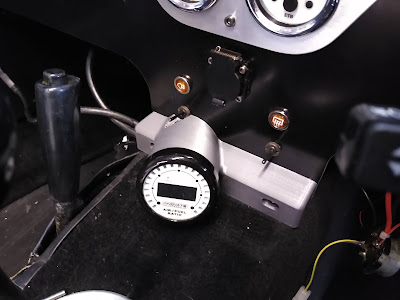 I've also decided to keep the Air/Fuel Ratio gauge for the time being, the previous owner mentioned a couple of times that the ECU could do with re-mapping, so the AFR meter will give me a good idea how urgent it is, but I didn't want it on the dash, so I drew up & 3D printed a pod that attaches to the dash mounting screws to hold it for now.

Also on the Stylus' job card today was a pair of Daytime Running Lights, they arrived from China a day or two ago & are the type I used on the Fury & the Quantum, they are just very bright LEDs in a small aluminium fitting with a thread on the back. I made up a couple of brackets, painted them matt black & mounted them in the radiator intake - where they vanished. That's what I wanted, ignition on & they are VERY difficult to ignore, ignition off & they're almost impossible to see. No photos yet as they're not wired up. 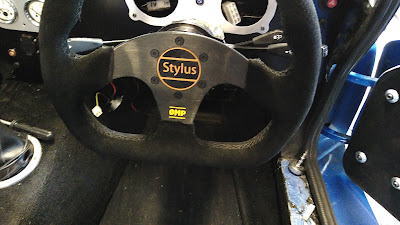 Finally for the Stylus, I added a little bling - again when I got the car, there was a "thing" in the centre of the steering wheel. The thing turned out to be a large wiring grommet - which was fine, but this bit of drawing & 3D printing looks better.

On the Quantum side of the equation, there was a club run to Cheddar on Sunday which saw the car no only keep up easily, but also achieve 38mpg on the blatt & over 40 on the way home. However I was getting concerned about the 3D printed throttle body adapter plate. It was working just fine, but looked a little "Salvador Dali", so having said at the time that the adaptor could ONLY be made by 3D printing, yesterday I made one in the garage from aluminium sheets - I'm that good. It's been tested & works, the only thing is I can't find my roll of gasket paper, so one of the interfaces is a cereal packet, but it's only cold air, so it's fine for now. 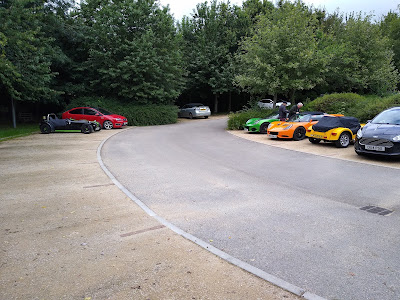 Here's a picture of the cars in the car park.