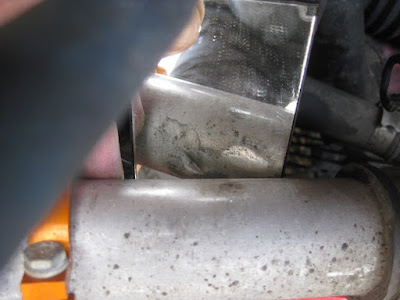 Earlier today I was looking round the engine bay of the Fury looking for the source of an annoying squeak (as opposed to the many merely irritating buzzes, squeaks, rattles & other "contact noises").

I noticed a pool of wet down by the front suspension mount & gave the top hose a hard stare, followed by poking around it with a mirror & found this:-

In the middle of the picture is the mirror & in the centre / bottom of the mirror is a worn indentation in the pipe. 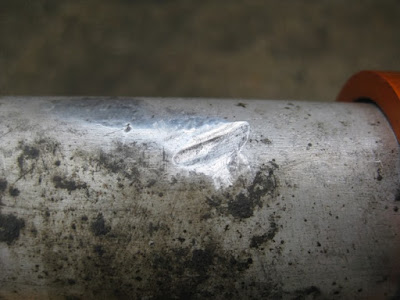 I took the pipe off the car & yes, there it was a scrape / wear about 1mm deep:-

Now the thing about this is, the pipe is less than 1mm thick. This indentation had been rubbing on a jubilee clip on the bottom hose below it to the point of wearing through - I think that's where the wetness was coming from. 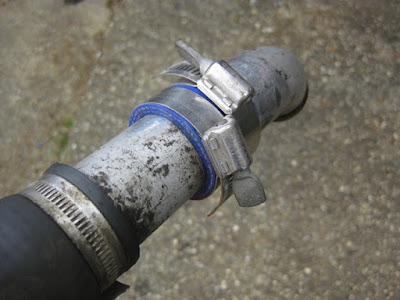 As part of the next mod, the whole top hose will be re-shaped & replaced, but I needed a quick & reliable fix until that happens. Fortunately I found a hose off-cut the right diameter & a couple of jubilee clips to slide over the damaged area &seal the score, It's not pretty, but it is watertight 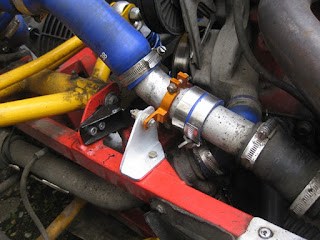 I then used a clamp I found in the garage (anodised orange), made an angle bracket from an extrusion off-cut to fit an existing hole in the chassis & a couple of self-aligning washers to adapt to the angle of the hose & this all supports the top hose away from the point of rubbing.

It looks a bit Heath-Robinson, but hopefully in a couple of weeks I'll have a job & can order the water pump reverse impellor, that allows me to get rid of the last idler wheel that allows me to re-route the top-hose & then all this will be in the bin.
Posted by BlatterBeast at 17:26