Day one
This required an early start, I was to meet one other blatter on the A3, then the rest od the southern group on at the M25 junction, Mrs blatter wasn’t keen on being woken at 04:00, so I gallantly slept downstairs.


The alarm went off.
I quickly put the bed away, collected my luggage & headed off into the gloom of early morning.


I had heard the day before that the guy I was to meet on the A3 had reversed his car through a hedge at some speed only the day before, so would not be joining us, I drove to the A3 junction & lurked under a flyover waiting to pounce. After not long at all barely silenced engines announced the arrival of the southern contingent & I pull out behind them – just in time for the traffic lights to change, hmm – not much of a pounce really.
After a couple of minutes I caught them rumbling along the M25 & having waved a cheery greeting, fell in behind the leader. 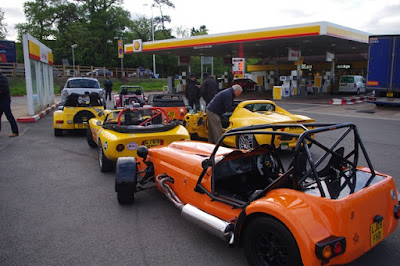 We toiled along the M25 to put some miles behind us, but soon enough we headed into the countryside & the more winding roads – heading for the point we’d arranged to meet the folk from the east – which we did, just as they pulled into the meet point.
We re-fuelled & the man behind the till said “are you going off to Silverstone?” Erm no – a little further than that. 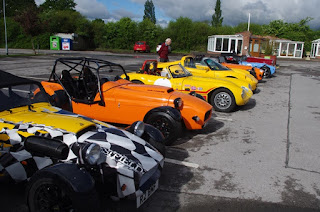 Having said our hellos & thrown around some insults we headed off to a garden centre for breakfast, they had only just opened but the cars caused quite a stir
Then it started to rain, but we were in the Peak District, so it was only to be expected, we pulled in for a photo opportunity with a fine view over rolling hills & one of our number said “my immobiliser’s not flashing”. Turns out this means the car can’t be started, but while we were stood about wondering what the appropriate amount of time was before we could say “well – see you then” someone noticed it was flashing again, the engine was started & we headed out.
Shortly after this we were rumbling along Snake Pass – I was leading – just flowing with the traffic, when there was a crest ………. & a camera van. I had a nice “welcome home” message from Derbyshire Constabulary when I got home, but I’ve not had a ticket since 1983, so I guess I’m due one.


To add injury to insult, it then began to hail & let me tell you hail when driving an open car HURTS!
After some city driving, which was just horrible, we hit Cumbria, which wasn’t. Almot as soon as we crossed the border the roads got interesting & the scenery changed to match. AND the sun came out.


Out target for tonight was Kendal & the Premier Inn. We had seen the parking on street view, but on arrival it turned out that there was none. What we had seen was a private car park - £5 a visit and there weren’t enough spaces, a suggestion that we could all cram up one end & block each other in was frowned upon & we were assured that parking outside the marked bays would get us clamped. We discussed using the clamp removal as an interesting engineering project & looked into what tools we were carrying, but in the end played safe & parked outside the police station overnight before retiring for a so-so dinner & an uncomfortable bed (if I EVER see Lenny Henry ……….)
I took my revenge by charging every single device I had with their electricity, the laptop, two Tomtoms, two GoPros, two GoPro wifi units, an SLR & a GoPro remote (Grrrrrrr).
Posted by BlatterBeast at 20:09