One of the problems I have when driving the Fury - the other being an innate lack of skill - is "stuff" getting in my eyes.

I wasn't expecting this.

I thought that I'd be pretty immune from "stuff" as my eyes are behind not only the windscreen, but my glasses as well.

I was wrong. On almost every drive, "stuff" gets in one eye or the other, last week I was doing 70 on the motorway when "stuff" got one eye & both eyes involuntarily shut for what seemed like a week, but was maybe two seconds. I decided it was only a matter of time before "stuff" got in both eyes at once & I crashed.

So what to do? A helmet on the road, in a car with a windscreen makes you look like - a helmet & as I'd want a open face one, wouldn't necessarily solve the problem. You can buy goggles that fit over glasses - but it seems, not my glasses. The solution was goggles with lenses built in. The SKCC has a discount code for www.i-sunglasses.com who do just the thing. Just a light plastic pair of goggles with interchangeable screens (tinted, clear & yellow) & a small metal frame inside to mount prescription lenses. I placed an order & they appeared within one working day - so far so good. To get the lenses fitted you contact www.ciliaryblue.com, who send you a box. In the box you place the glasses, & the prescription, post it off to them & they come back sorted. Hurrah - no more "stuff".

Having got the goggles, tried them on & succeded in looking like a know on the office, I needed to order the lenses. But like a twit I put the wrong e-mail on the order. The first half of the work address, the second half of the home address. Twit. This was about 17:30 yesterday, so I hit the "contact us" link, told them what a silly boy I'd been & in the time it took to walk upstairs & print the receipt, I'd had a reply saying they'd corrected the order & it was all sorted.

So in about a week's time (once they've been off on their travels & returned) my driving should be "stuff" free. 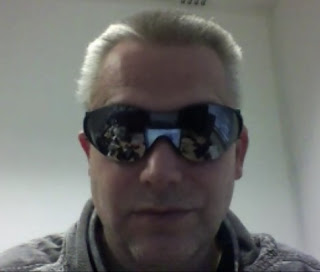 I will however bear more than a passing resemblance to a teenage-mutant-ninja-turtle.
Posted by BlatterBeast at 10:16