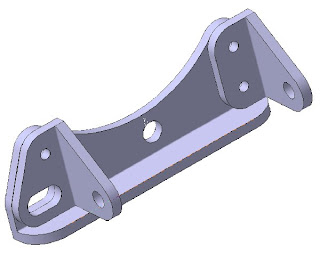 One of the issues I was facing with the Zetec swap was how to drive the electrics. Just Ebaying a Focus alternator wouldn't do it because modern alternators are controlled by the car's central "brain" & won't work without it, but I'd only recently overhauled the old alternator in the Fury, & asking around I think I've sourced a multi-vee pulley (thanks Mango). So all I had to do was mount it. A little googling provided off the shelf answers ranging from £36, to over £100 (this is just for the brackets!), so I drew this up on the computer - and I saw that it was good.

I ordered some alloy angle, chopped it up & made this, seen below mounted to the engine with the alternator in place (not quite finished at this stage). 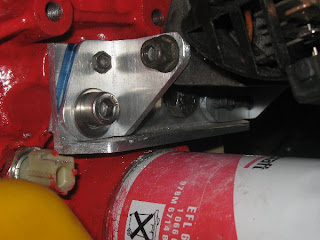 That got it fixed down, but I needed an adjuster to keep the belt tight. I'd drawn up a bracket that attached to two existing hole positions, but it was too far back & the adjuster wouldn't have been rigid.
On the engine already was a bolt holding the cam pulley cover on, but that was going into a plastic cover & a thin steel bracket, so had the same wobblyness issues. It looked like there was nothing I could mount to in the right area. Then I was struck by the "bleedin' obvious" & combined a rigid alloy bracket with the thin steel one to make something that was both in the right place AND strong enough. 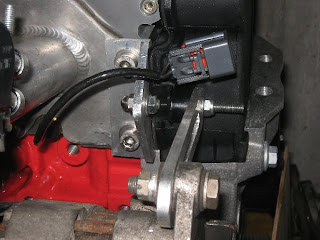 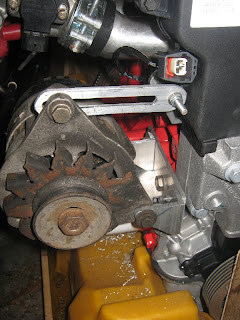 I took the cover bolt out, replaced it with a length of studding supported by an alloy bracket as shown in these pics. I also made the slotted strap from an off-cut from the main bracket. Of course it may all prove to be a waste of time, but I think it should be OK, all the parts have clearance & there's plenty of adjustment. Naturally it's also a lot lighter than the steel one on the crossflow. Total cost for all this lightweight alloy wizardry? £11 + £3P&P.

Marvelous
Posted by BlatterBeast at 12:41