Ah the long awaited opening of the Hindhead tunnel posed a temptation too strong to resist & at the the suggestion of Mr Mangofury who was kindly dropping off some tools for me, we went to do some accoustic testing. 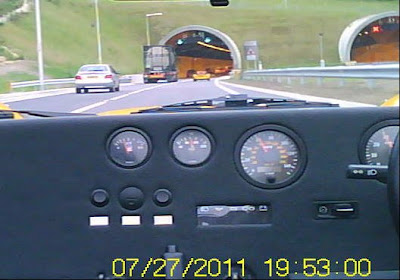 Here is a still from his blatcamera & shows my Fury about to plunge into the very earth . There are average speed cameras in the tunnel, but nowere does it say what gear you have to be in. Having travelled to quote theBBC "Britain's-longest-road-tunnel-that's-not-under-an-estuary" - so not Britain's longest tunnel then? We headed for home. 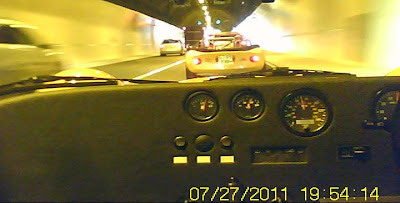 This left us with something of a problem, we needed to avoid the queue the tunnel was dug to cure (the nortbound side isn't open yet) so we left the A3 and patrolled some very country roads, before rejoining the A3 at Hindhead & coming home for a coffee. A pleasant evening indeed.
I continue to be astonished as just how well the Fury holds the road, from the A3 where buffeting was minimal even at "quite high" speeds, to the narrowest of undulating country roads, the Fury just sticks & inspires confidence. I'm sure it would continue to be tarmac-bound at considerably higher speeds, but on public roads, the fear of what might be round that next blind corner tempers the right foot somewhat.
Posted by BlatterBeast at 22:05