In my first 50 years I went to the Isle of Wight once, since turning 50 I've been twice & it's only been four months. 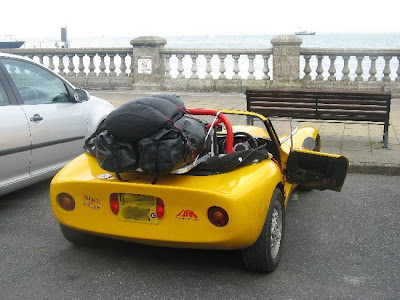 The occasion on this occasion was a fiftieth birthday party for a bunch of school friends. My wife hadn't been looking forward to the journey much, she's not keen on the Fury, but we loaded up & set off for the charge down the A3 to the ferry port, I kept the speed down, but there was still a little "turbulence" shall we say? She was cold, it was bumpy, she was uncomfortable .........
We did a tour of the island on arrival as we had some time to kill before we could get in the house. We stopped off near Sandown Pier which had looked lovely in the sunshine only the week before as it formed the back-drop for a photo of the Rickman, but today it looked rather down-at-heel in the murk. After a hot drink & a sticky bun the world seemed a little brighter, & we moved on to Freshwater where a local pub "The High Down Inn" http://www.highdowninn.com/ provided a spectacular lunch at a very reasonable cost, made even better by the arrival of a job offer while we were eating it - just as the sun came out. 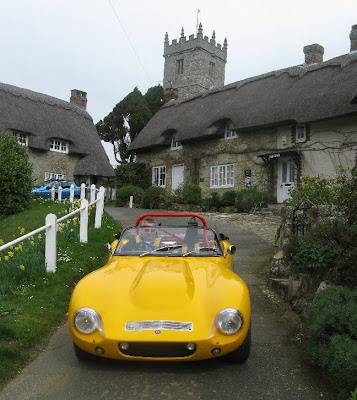 Next stop was the house. Tapnell Manor was just what the doctor ordered after six months of employment related stress, splendid grounds ("garden" doesn't seem adequate) & plenty of room for all fifteen of us. The next couple of days were spent driving the island, chatting with old friends & erm drinking - a bit.

My wife slowly got used to being in the Fury & even at one point said it was "fun" which was nice.

So again not much actual blatting to report, but a VERY pleasant weekend away turned into something of an adventure by taking the Fury  - rather too "interesting" on one occasion in Godshill when Tony-the-twit left the lights on resulting in a dead battery & my wife having to push start the car (three gallant bystanders saw her struggling to reach the roll bar & helped). But there were no further problems.
Posted by BlatterBeast at 08:46