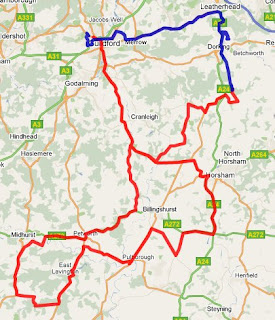 Up with the lark - well, up when my wife elbowed me in the ribs for snoring, I pulled on the clothes I'd heaped up outside the bedroom, indulged in a quick bowl of "own brand" Frosties & headed for the garage just before sun-up. The air was crisp, the Fury nestled purposefully on the drive in the early light, serenaded by "the squeaky bird", I have no idea of it's species, but it goes "eeeeeeeee EE, eeeeeeee EE, eeeeeeeeee EE, ALL DAY LONG. I need to either teach it some more notes or shoot it.
Waypoints in the satnav - check, GPS logger on - check, camera set - check, say a quiet apology to the neighbours & push the starter .............
I headed into the pale dawn as quietly as a short single box exhaust will allow & down the A281, a wonderful road when there's no traffic & after about an hour, reached the rendezvous, a petrol station just off a junction on the A22. I knew I was in the right place because even through the bushes I could glimpse cars glittering bright green, red, orange & yellow.


I took my place on the end, next to a Sylva Riot & said my hellos - once again the only car with doors. By now the sun was climbing into a glorious blue sky, so the ski jacket was stuffed into a footwell & after a short chat, the assembled throng mounted up & headed out. I've not been on a warm dry blat before, so in the past the Fury's lack of power has never been an issue, the other cars being grip-limited, today would be different.
The colourful Caterpillar of cars set a cracking pace through the Sussex weald on ribbons of tarmac threaded between fields & villages, & joy of joys the Fury could keep up. There were inevitable hiccups, the SKCC is a young organisation, but it already has it's traditions, the whole chain of cars WILL have to turn round, we WILL find a wet & muddy farm track, we WILL disintegrate into three groups taking different routes to the breakfast stop. I ended up at the head of one such after I had no opportunity to overtake & lost the lead two cars. 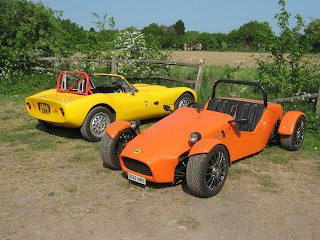 Oddly my group arrived first & had just dismounted, when the main cadre arrived, followed about 1/2 hour later by the stragglers. The breakfast venue was a cafe attached to a fishery & caravan site, our leader bought my breakfast in exchange for a starter motor, & we sat outside discussing the weather, the adventures we'd just had & the bikers among us critiqued intensive care units they'd known & compared scars. The sun climbed higher, the mist lifted off the lake, all was well with the world.
All too soon I was heading home, a short de-tour up Box Hill - awash with cyclists since it became part of the Olympic cycle race route & back to Guildford - where the Fury broke down. Strangely the fuel pump just stopped, but a tap soon had it going again & for once I was home a little earlier than promised.
Posted by BlatterBeast at 08:33