Testing Times For The Stylus

So the MoT went well, the Stylus passed with an advisory on the handbrake. It wasn't all plain sailing as the damn fuel tank hit the concrete as the wheels dropped onto the brake test rollers, but that will cease to be an issue soon. 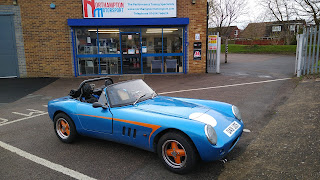 Today it's been to Northampton Motorsport for corner weighting, geometry set up & engine mapping, so an early start for me - though not as early as the 03:00 I awoke at. For the journey north I had the hood up & the full side screens on for the first time - I also had ear defenders as the scream from the axle, transmitted through rose joints & resonating through the flat rear bulkhead was deafening - a job for another day. 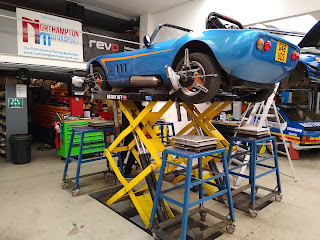 On arrival the car was pushed round to the workshop & lifted into the ceiling for the suspension adjustments. It all seemed to go well & so after a while it was wheeled into the rolling road bay for the mapping, which is where it unraveled a bit - though nowhere near as badly as the RR session for the quantum. Firstly there was an air leak in No. 1 inlet tract, so the throttle bodies came off to correct that, then when running on light throttle, the engine regurgitated 1/2 litre of oil through the cam box breather, which is something I'll need to look into - it's not done it before.

Inevitably there are a few technical issues I need to address, but ultimately it didn't go too badly at all & all the good folk at Northampton Motorsport were very professional & efficient.

But you really want to know the numbers don't you?

Weight wise, I knew the car was heavier than the Fury (600kg) because the rear floors, the rear transmission tunnel, the bulkheads & the side panels are all steel, where on the Fury they were aluminium, but having taken a load of weight off the car I was hoping for 650kg after the fuel tank swap. In fact it's 653kg before the fuel tank swap - which could shave another 8 -10 kg off. So that's a good thing.

Then there's the power, I knew the car was similar in performance to the Fury, but the junkyard Zetec actually made 175bhp with 155ftlb torque which gives it pretty much exactly the same power / weight as the Fury, so this is all excellent news.

What was less good was deciding to drive home with the roof down - it pissed down on the M40 making me & the inside of the car very wet indeed - lucky I had those removable seat covers made.