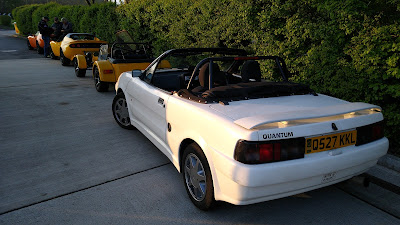 With the successful fit of the PowerLite starter I embarked on a blatt with the Rogue Runners. This week the start & end points were convenient (OK they weren't way out east), so I was up with the lark - in fact I was awake SO early I could've taken the lark breakfast in nest.

I put the hood down, the car started beautifully & I met the others at a filling station on the A24. There were SatNav issues, so we would have to keep in sight of each other, the car started again & we headed off. After a while there were signs for a closed road, but the SatNavs usually know about these things & steer us round. Nope, this time it was our route that was closed, just before we arrived My SatNav was saying turn left when we went straight on, so after turning round that would be a right - no, it was now saying turn left in a mile, everyone else turned right & I followed. "No problem" I thought "I'll re-load the route & tell it to start at the closest point", easy. But when I tried that it just said "no route possible". 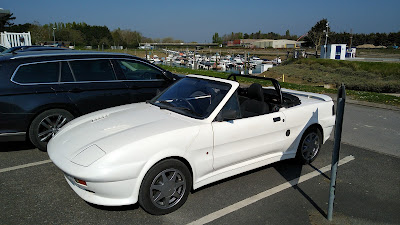 So I followed the others - Brian ahead of me was kind enough to make sure I could see which way he'd gone at every junction. As a precaution I set the SatNav for the cafe & as we approached, it did indeed direct me to the car park - then out again & on somewhere else for another 50 miles. No idea what it thought it was doing.

We sat in the sun at the cafe, but were a little perturbed when the waitress said they were out of sausages!! We needn't have worried, when the breakfasts arrived sausages had been found.

After some time we headed home, there was a classic car meet around Arundel & some old bloke in an immaculate Triumph Toledo 1300 (why would you??) pulled out right in front of me & then laboured up the long hill doing 35. There were LOADs of interesting cars out today, which was good to see. By this stage I needed fuel & had to resort to buying a little for £1.69 / l - EEEK.

But the big news was that the Q performed just about faultlessly.

I arrived at my Brother's & handed over the fuel tank access panel & level sender as the Stylus' new tank is welded & will be leak tested this week. Then I'll have TWO fully working kits!

One final thing, I've adding a little decor to my Kitchen:- 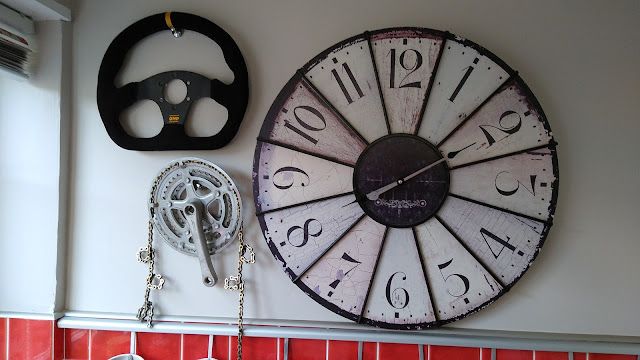