One Ray Of Sunshine

Last weekend someone got in touch saying they were interested in buying the Quantum & asking for more details & photos. I sent some, being brutally honest about the condition & the ongoing problems with the starter, but adding that what it needed was a modern geared starter & offering to knock £250 off any agreed price to cover the cost - haven't heard from him since.

But with work still looking promising, I bit the bullet & ordered a PowerLite starter for the car & found that the recommended one wasn't in stock, but a different one was & joy of joys was £180. It's maybe 3/4 the size & 1/2 the weight - the size being the critical thing, as instead of being 1/2" from the hot exhaust, it's now about 1 1/2" & air is the best heat insulator. 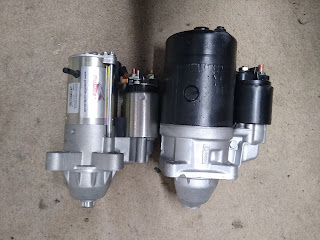 I fitted it this morning & instead of the wuh .......... wuh .......... wuh ..... wuh..wuh wuh wuh vroom I had been getting, in now goes ning ning ning vroom. But, it's the Q so with one thing fixed there was bound to be another & sure enough there was a coolant leak. Fortunately, having refurbed two cars in two years I had some spare heater hose & could fix that straight away.

So the next thing was fuel. The gauge was DEEP into the red, but I set off for the nearest petrol station & obviously hit every traffic light at red, it took ages to get round the A30 roundabout, so by the time I rolled up to a pump the temperature gauge was pretty high - certainly as high as the last time when if refused point blank to start. I optimistically filled it right up, collected the receipt to give it a little longer to heat-soak, got in & turned the key. 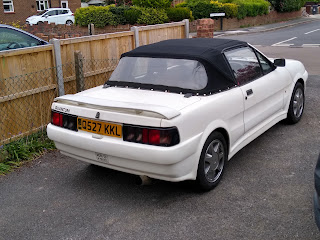 Excellent! So on the off-chance that the Stylus' fuel tank isn't ready, I have a spare kit for the road trip, & the man that claimed to be interested in buying the Quantum has missed a bargain.

Plugging the numbers into the Q's MPG spread sheet, it appears to have done 55mpg which sounds way too high, but we'll see over the next couple of tankfulls.