Ah - you're showing your age, finishing that off. But yes, some orange has happened - amongst other things.

Rally Design got the brake pads & master cylinder to me on Friday & I fitted the new master on Saturday morning - hideous job, but done now & all finished except for a little more bleeding. The brakes will now lock the wheels which is kind of re-assuring. I took the car out on Saturday PM & did about 30 trouble free miles, but the tyres really are rubbish. The Fury had what I called "carefee handling", you had to REALLY abuse it to make it lose traction & on a dry road you cold more or less dump the clutch & slam through the gears & the car would just go. The Stylus has the same engine, but a taller first gear & a taller diff AND a limited slip differential, so the tyres must be the reason it'll spin up the wheels at the slightest provocation. It's like driving a '60s American muscle car.

Anyway, I was very careful & light-footed, the new wheels & tyres should be here tomorrow. 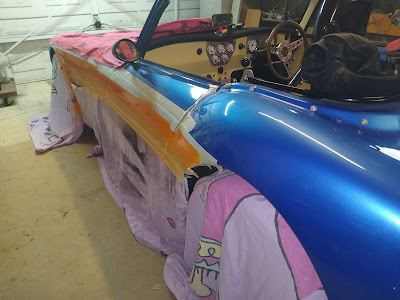 Then yesterday evening I went into a bit of a decline - it's the depression I suffer from, it's just a chemical imbalance in the brain & it's cost me two marriages, but I now undertand it better than I ever have & living alone it's much easier to deal with. It was still pretty bad this morning when I went out to the garage to look for something to do - I decided that I'd put on the "stripes" (more of a HotRod scollop really). Maybe not the best day to choose, but the depression alters my perception, so I probably didn't see it like that. The fist one is a bit of a mess to be honest, the paint has bled under the masking. Not sure what I'm going to do about it yet. the driver's side went quite well though - so that's OK then - that's the only side I'll see when I walk up to it. 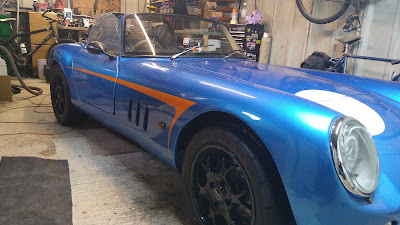 This afternoon the depression cleared - around 3:15 - I felt it lift. Weird I know.

So I just need those wheels tomorrow.