After spending all day yesterday fitting a new, larger clutch master cylinder I was "a little disapointed" to find it was still exctly the same. It worked if I gave it extra travel by having the pedal leaning away from the bulkhead.

There was "lost motion" in the pedal - it moved some way & then got firmer as it started doing actual work, but was that lost motion the master cylinder compressing air, or was it the slave cylinder moving up to the clutch?

I had bled the system through & also used an "easy bleed" pressurised tool to no avail, but this morning my brother came over & I lay under the car opening & closing the bleed valve while he pumped the pedal. Imediately there was air coming down the pipe, but was it just the air in the bleed hose being forced out or air from within the system? I closed the valve & my brother said it felt better, we went through the same cycle a few more times & all the lost motion was - lost.

As I had him there, we went round the brakes & the brake pedal firmed up as well, so after rewarding ourselves with a hot chocolate, I started the engine & drove the car back & forward a foot or so - SUCCESS!

This afternoon I've put the bonnet back on, done a nut & bolt check around the car & driven it out the front of the house for a new "fleet picture" with the other cars, but now it needs road tax, petrol & some miles put on it ready for the rolling road session in early April. 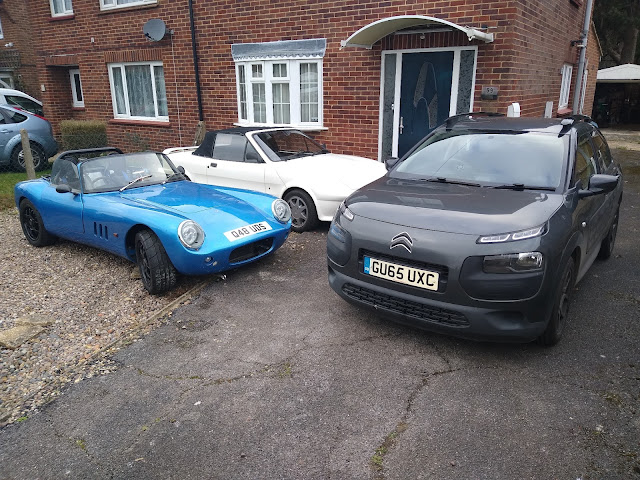