Up In The Air

The cars have been swapped over & the Quantum is now in the garage, a foot in the air on axle stands. Yesterday I started looking into raising the exhaust. I'd made a bracket to support the pipe about 1/2 way along when I fitted the Zetec, but it still just caught the drive when I left the house, then of course there was the incident with the speed hump in the hotel in Wales when the exhaust got knocked off. 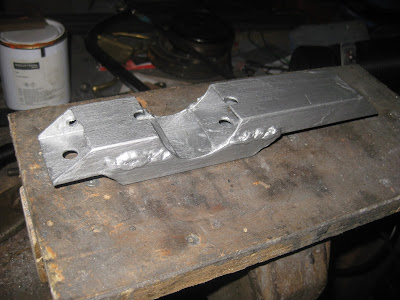 The old bracket was just a sheet metal angle, the new one is a much more substantial item that will raise the pipe by about 10mm - not much, but it doesn't need much. It's made from one of the legs of my old desk at work - they did throw it out before I "acquired" it.

It features my usual standard of welding & has had a coat of hamerite ready to go on the car tomorrow.

Next I straightened the steering wheel by adjusting the track rod ends, both kits have the wheel offset by about 5deg to the left - the Stylus being worse as someone fitted a "motorsport" D shaped wheel with a yellow band at 12 o'clock - which wasn't quite a 12 o'clock. So hopefully both wheels are now straight - or straighter.

I may have fixed the Quantum's gearchange! Up until now it's been pretty horrible, with no "feel", I had been told that it was because I had a late model gear shift, but an early gearbox, but I have found nothing on the internet to back this up - and you can usually find something to back up ANY theory on the internet. I added a small spring to the linkage I remembered my Mum's Fiesta had one, but the Quantum didn't - it's not stiff enough, but it's a start, but that made things worse because third - like a good heart - was hard to find. It occurred to me that the spring was pulling the lever to one side of the travel, but maybe that wasn't lined up properly with the selector in the gearbox, tweaking that has made all the gears easier to hit, BUT as mentioned, the car is a foot in the air. It may be a different thing when driving it.

Then it was onto the Q's handbrake - which is pants! It's been commented upon as being ahem - marginal at both MoTs I've taken it to & I had assumed the inner cable was kinked as it had not been well installed by the previous owner (one Colin Chapman - no, not that one). but initial investigation made me think that wasn't the case. One wheel works OK, I was able to tighten & undo the wheel nuts on the offside with just the handbrake resisting the torque, not so on the nearside. Tomorrow I'll take both drums off & see if I can see what the difference is.

So maybe, when it comes down off the stands it'll drive like a proper car! Or at least a proper car with really heavy steering.