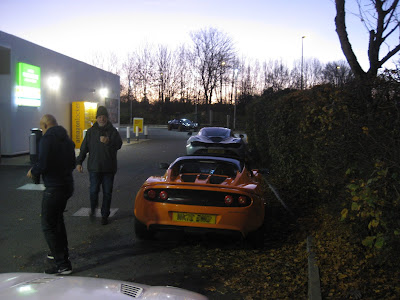 Up before the lark again & off out to meet up with some blatting folk near Horsham. The plan was to head out towards Winchester, turn back to LA (Littlehampton) & get breakfast. I had a further plan to go from there to Tangmere to walk round the museum, then go on to my cousins house for lunch with the family.

This weeks run proved to be a little different, they've been something of a Lotusfest since the writer of routes (blessed be his name) started driving a Lotus, but word had spread & today's gathering included a Ferrari California, two Maclarens & a Porsche GT3RS as well as a number of Loti, a Caterham & - erm - the Quantum, with a value less than the cost of servicing several of the other cars. It looked like the start of the Cannonball Run.

When it was time to go several of the newcomers were arguing about the route, not believing it could be three hours & planning on cutting it short. I followed the organiser & a group of about six trundled west with the rising sun behind us. All went well, the steering was nice & light after I moved the tyres round, the gearchange was better & the car is more than quick enough to keep up, until when pulling out of a side turning the exhaust separated from the manifold again.

I pulled into a car park, put two wheels on the kerb & went underneath, but wasn't able to get the pipes to align, so I reset the SatNav & headed due south for breakfast - very noisily. But on the upside the sun was out & it was a pleasant drive with the roof down. 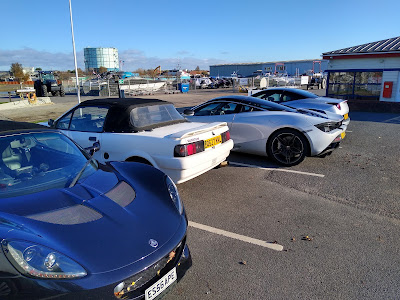 When I arrived there was just a Maclaren & the Ferrari in the car park, so I parked up next to them thinking how embarrassing it was going to be & was shown to the table where the owners were sitting. Is seems the bulk of the supercar crew had almost driven straight to LA & arrived at 8:00am to find the cafe didn't open until 9:00 & had driven off. The two still there had found a coffee & waited. I explained the circumstances of my early arrival & then we to my complete surprise spent ten minutes talking about the Quantum, the Fury & the Stylus! Both of the chaps had owned Caterhams & one had done a lot of research & knew a lot about kits. 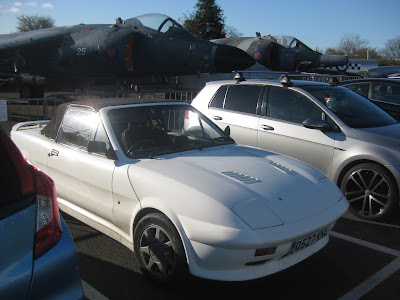 After breakfast I rumbled over to Tangmere where there were an unfortunate amount of tin-tops parked in front of the Harriers, but I managed a photo of the Q with them - sort of. Neither was an aircraft I'd had anything to do with (I mostly worked on Harrier IIs), the GR being far too old (its the actual aircraft that won the London to New York air race in the 60s), the Sea Harrier could've been one I worked on but it didn't give a date for first build, only conversion to FA2 standard,

I walked round the small but information packed museum for a couple of hours. They have some significant planes there - the Meteor that took the absolute speed record to 606mph & the Prototype Hunter that when modified a little took it to 727mph. Having been apprenticed at the Hawker factory in Kingston-Upon-Thames, I was interested in the workmanship & took a photo of the riveting on the nose of each aircraft:- 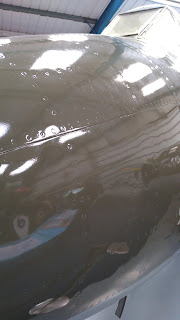 The Meteor has "flush rivets" in the nose area & highly polished gloss paint. 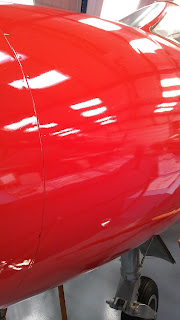 The Hunter has a finish I'd be happy with on my car - there are just as many rivets there, but most are invisible. Have they been filled & smoothed for the speed record attempt? Well if they had been The Meteor would've had the same treatment & the other Hunter in the shed next door was very nearly as smooth. Its just Hawkers - we were damn good! (I say "we", I was never that good myself, that's why I went to design.