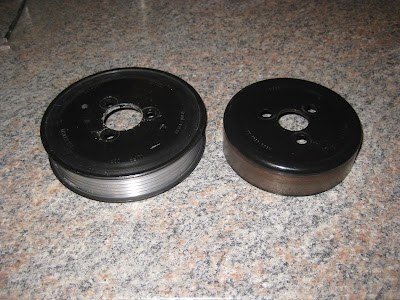 The pulley issue is resolved!

I know I've been whittering on about the water pump & alternator pulleys for a while, so you'l be pleased to hear the whole issue is now sorted - & quite elegently too. 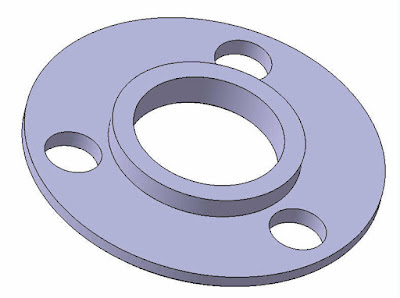 I drew this ring up on CAD with the idea that the outer diameter of the central "boss" would snap into the pulley, the inner diameter would fit over the central boss on the pump & the bolts would hold the whole thing together. 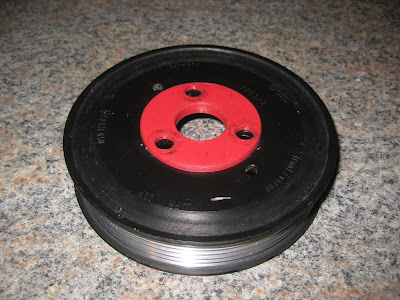 To check the sizes I printed one in "prototype pink" (when I ordered it it claimed to be red - it wasn't, so as I don't know any pre-pubescent girls who might insist on pink stuff I use it for prototypes). That fitted perfectly & I wondeed if I could just use a printed one, but sense prevailed - as the mounting bolts go through the part, when it got hot the platic would soften, the tension in the bolts would be lost & the pulley would first lose concentricity & then come off! 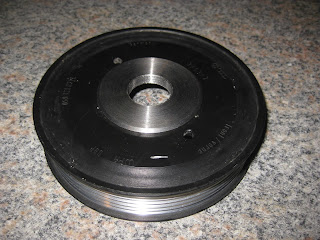 So yesterday afternoon in spite of the continueing media inspired fuel shortage, I took the Quantum over to my brother's house & re-made the part in steel - he did have some alloy, but it was an odd shape & would've taken ages to machine it down to something I could start from - all went well & this morning I just need to put the three mounting holes in & give it a coat of paint & I'm done.

The Audi part is a little larger than the Ford one, which means the pump will turn a little slower, which is OK as by internet reputation the Ford impellor cavitates at high RPM, it's also a little further forward, so it doesn't sit on the same plane as the Ford one, that's OK because all three pulleys have 6 grooves, but as the belt is only driving the water pump & the alternator I can use a five or even four groove belt & it can sit on the grooves that align - & as a bonus, because the Ford pulley is steel, the Audi one alloy, even with my steel adaptor, it's still lighter than the Ford one & the weight is concentrated closer to the centreline, so the engine will spin up an infitessimal bit faster.

Best of all, the whole thing has cost £15 & some time rather than the £110 for a billet alloy machined part from a motersport supplier.