Over the last few days I've made a little progress, I've fitted the inertia shut-off switch to shut down the fuel pumps in the event of a crash, the switch I got had three terminals, a common, a normally on & a normally off, so I've wired the supply from the relay to the common, wired the normally on to the fuel pumps & the normally off to a lamp adjacent to the switch. The switches don't usually trip, but if it does the light will draw my attention to the reason the engine won't start.

I've also been looking at the inlet plenum - & cutting it up.

I did some trial fitting & found that, as expected, if I fitted it the was the manufacturer intended it hit the suspension turret - it was intedned for a rear wheel drive car with the engine the right way round, my plan had been to cut the "runners" - the tubes between the plenum & the mounting flange - & fit the plenum the other way up. However, that meant the throuttle body hit the brake servo (sigh). The plan now is to cut off the "badger's head" tapered part of the plenum at 60 deg & mount the throttle body on an angled plate which should work. 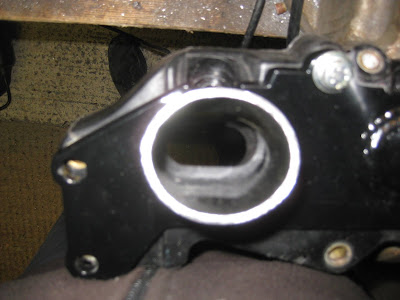 But having cut the thing in two I started modifying it to fit on the part it should just match - the mounting plate of the old inlet manifold, I got it to fit but was a little shocked when I looked inside the runners & saw the miss-match between them & the plate. In the photo you can see the step where the lower side of the runner is about 8mm below the hole in the plate. I've done some porting work to blend this out to try to smooth the air flow. 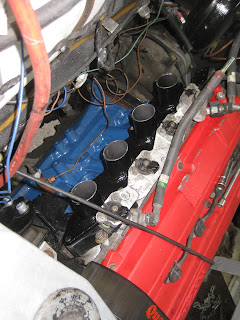 So the inlet side is almost done, it needs some packers made up & some fettling done but it's not far off, this photo's 90 deg out, so you'll have to put your right ear on your shoulder to see it propely, the black bit is the mounting flange & the runners, the silver bit is the fuel rail & injectors.

Next job - the plenum itself.