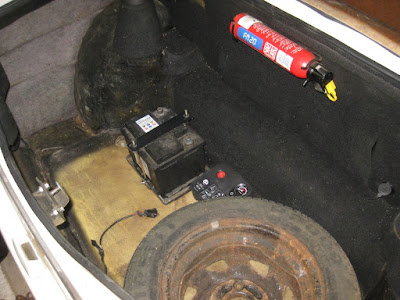 I wandered Out to the garage this morning with no real plan. I decided I'd look at putting the Fiesta battery tray in the boot - I'd already removed it from the brackets on the subframe. It had two captive bolts with splines under the heads - which I knocked out - but I'd need bolts for the other end, something low profile so it didn't push into the battery, something that would lock into the tray so I could do up the nuts from the outside. Obviously impossible - and yet - the first thing I saw on a shelf was two mushroom head, galvanised bolts with a square under the head, I'd drilled the boot floor so now I enlarged the holes in the tray to 7mm & used a nut to press fit the square into the round hole - perfect, but I'd need a battery clamp. 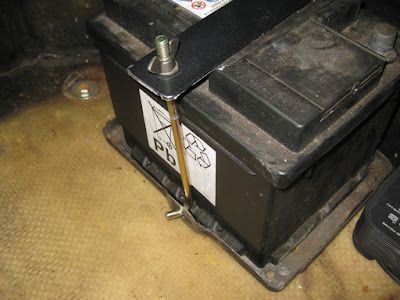 A little while ago I took apart a shelf unit thing & put a couple of 8mm ish rods with threaded ends in the metal store, I took one out, cut it in half & bent the cut end into a hook to fit in the hole in the battery tray, I made a strap for the top, but when I tied a nut on, the threads were not M8. No problem, I'll take one to Margnor, they may even have wing nuts. I moved on to another little problem - the Zetec flywheel had no clutch dowels. I established they needed to be 1/4" & thought about an old toolbox with stuff left ofer from my first car build - about 40 years ago. The car was imperial so I've kept the nuts & bolts separate, in seconds I'd found a disc brake pad retaining pin exactly the right size, in a few more seconds I'd found TWO WING NUTS that fit on the battery clamp threads, then the phone beeped to say my new angle grinder had arrived!!

So, the battery is now all moved & clamped down & after picking up the angry grinder I was able to cut off the old battery brackets smooth down the welding & paint the front subframe with POR-15 to kill the rust & act as a base coat for the final colour. I've also fitted riv-nuts in the subframe for the inner wings,

I took the clutch off the old engine, the clutch cover looks fine, but the friction plate is quite worn, so I need to get a new one on order before the engine can go onto the gearbox & get re-fitted to the car.

That makes it sound as iff the job's almost done but there's lots of systems type jobs still to do:-

Run battery leads to the front of the car.

Take the dash out & fit the ECU & a few relays.

Get an intake plenum & modify it to fit.

Work out which exhaust manifold I'm going to use & make it fit.

There are no mjor unknowns there, so I'm hoping to just keep working steadily towards it & make it work.

A first start in February would be good.