It was always obvious that the engine wasn't coming out the conventional way, the pulleys are hard against the subframe rails, so it would have to come out with the gearbox. That meant it was easier to take the car off the engine / gearbox / front suspension.

I'd already stiffenned a garage roof beam & decided the car weighed 750kg, mostly at the front, so the weight to be left on the floor (engine etc) was about 250ish kg, leaving 500 kg biased towards the back. The hoist has a limit of 250kg, so - easy then. 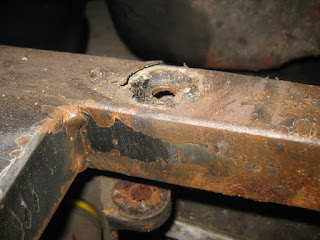 I removed all the M10 bolts holding the Ford parts to the sub-frame & realised - with not a little disappointment - that there were no crush tubes in the cross member so when the M10 bolts had be tightnned, the tubes had crushed.

The photo is of the worst one & it's not too bad, but when you see the quality of the engineering in the composite parts of the car, I was expecting better than this.

Anyway, I left work early & visited Margnor & bought a selection of shiny things, among them were some beefy square washers to put over the sunken areas & spread the load out to the side walls of the tube. 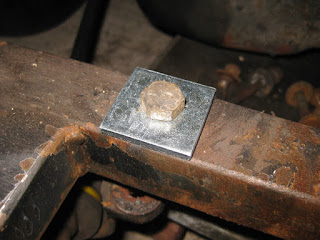 All of that is way in the future though. I disconnected the front track arms, steering links, brake lines, gear shift & strut top mounts, so the front of the car was just resting on the suspension.

I'd already put an engine "skate" under the engine & gearbox, so I wrapped a chain round the lower cross tube, hooked that onto the electric hoist & pushed the button. 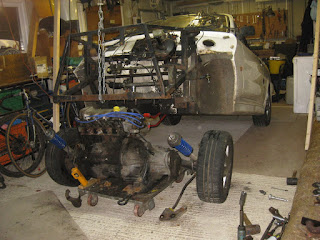 The car rose, I took it up in small amounts as the higher it got, the more weight is on the back wheels, then when it looked properly scary I was able to wheel the engine skate out from under the
car & roll the car back a little to give me some space to work on the engine.

I've now dropped the car down onto axle stands so I can clean & paint the front subframe, it's not badly rusted but after the new sections are welded in, I shall wire brush it & re-teat it all before the new engine goes in.

The new engine also needs a coat of paint & probably a cam belt, but hopefully it won't be too long before they're getting mated back together. 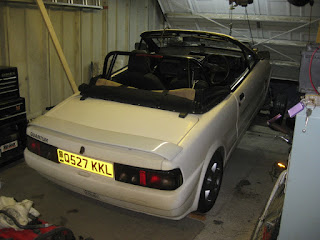 Then the hard work starts with the engine bay wiring & locating equipment. I think I may be able to re-locate the battery to the boot to free up some space under the bonnet. There's plenty of room in the boot, basically the whole rear half of the car is storage.