I may have been down in the dumps whe last I wrote, but I needn't have worried, things were about to get woerse.

On the way back from a very pleasant blatt out to the very pleasant Bourton-on-the-Water where we ate a very pleasant breakfast, while some very pleasant young oriental ladies were photographed with out hostelry as a backdrop, We got as far as Hartley Whitney when my reverie was disturbed by the SatNav woman saying "turn right HERE", the road was clear, but I was almost past the side road. The sensible thing would've been to cary on, turn round & go back, but I decided I could make the turn.

But I was wrong.

I was low curb, with a 45deg angle to it, so the car should've gone over without a problem, but one of the curbstones was mis-aligned to it's nieghbour & stood up by about an inch. This passed under the front of the car & neatly took the front corner clean off the sump. It was quite a thump. 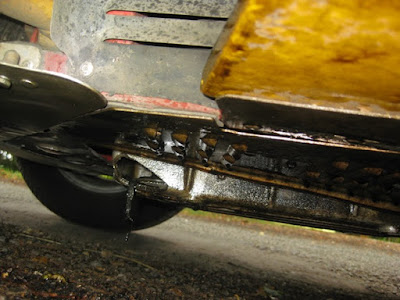 A breif technical inspection showed the extent of the damage  (a 'kin big hole in the sump") so I was going no-where. I called Green Flag, to be told I should download thier App - not on my Nokia I won't, but if I didn't want to do that the call wait time was currently 15 minutes - but my call was importent to them.

Eventually it was answered & I explained that all the oil was gone, so I needed a truck - not to worry, someone would be with me in 30mins - great!

After about 25 mins what appeared to be a 16 year old in a small van appeared I told me that all the oil was gone & I needed a truck - which would be another four hours. 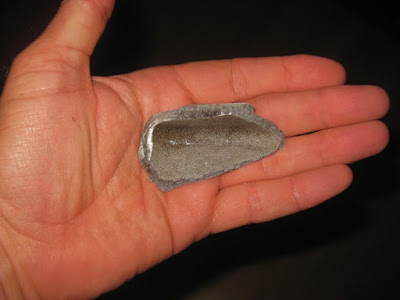 I arranged for my daughter to pick me up & went home for tea, then went back to meet the truck later, we got the car off the truck & into the garage & I shut the garage door & went to bed.

The next day I started looking for a replacement sump. The quality of the one on the car was "adequate" but the piece that had departed had sheared along the extremely coarse grain bounderies, it was not a quality casting.

I have always been a little suspicious of cast alloy sumps as the tend to shatter on impact rather than bend & they seem to be very thick & heavy for what is essentially an oil-tight box.  The obvious alturnative to my now defunct one was the "Racecraft" sump, but with the comedy price tag of £600, I wanted something  little more "basic". I happened upon the "KitSpares" site (the parts division of GBS) who were offering a steel sump which was much more the sort of thing I wanted & was half the price.

In preparation for the swap I thought I'd jack up the car & take off the belly pan. cutting a not-very-long story short, the car slipped on the jack which went up through the side pod.

Really REALLY not having a good week.

I may have slammed the garage door a bit. 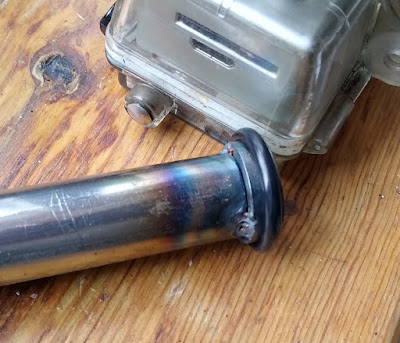 On Friday the new sump arrived. As promised it was shiney black on the outside, but rusty inside, OK it would be full of oil so "whateva", then I looked at the supply pipe Which is a clever design, in as much as it's a bent pipe with the bottom cut out & meshed over, but the end cap wasn't welded all round so there was an air gap at the top - not ideal on a suction pipe.

So bright & early Saturday morning I went out to the garage & tried to raise the car again - damaging the side pod even more, then raised the front, took down the belly pan, took down the sump & swapped the new pick-up pipe onto the engine, then trial fitted the sump - "clunk" it went.

The sump is intended for a seven type car - GBS make seven type cars, so why design a sump that can ONLY be fitted or removed with the engine OUT of the car? 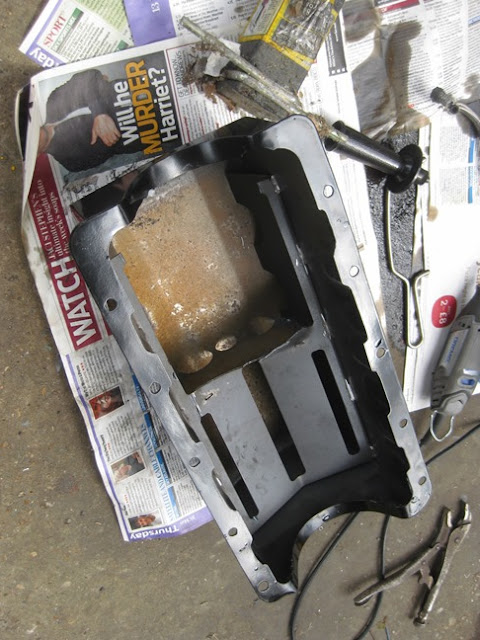 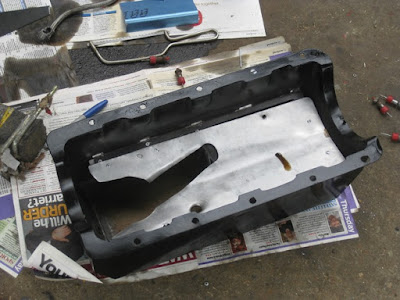 I took the sump back down & reched for the angry grinder - & cut out the front baffle completely. Then it fitted. so the slot in the baffle was a whole 1/2" too short to allow the sump in & out with the engine in!

I re-made the baffle I made for the cast sump to replace the part I'd cut out & filled (I thought) the oil pump with vaseline bought especially for the job (I'm emphasising that I didn't just have a large pot lying around) fitted the sump gasket with blue loctite sealant (which oozed out all along the join - a good sign), put in some oil, took out the spark plugs & turned the engine over - no oil pressure - great.

So tomorrow when I get home from work I'll start all over again. on the up-side, the new sump barely shows it's face below the chassis though so it will be better. 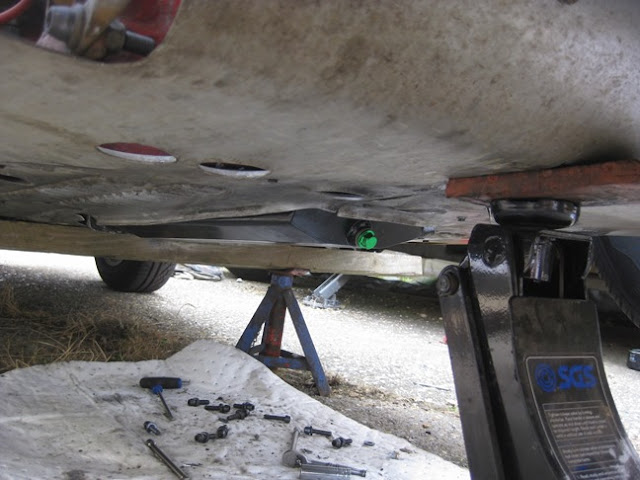