Now the sump seems to be sorted - did I tell you the supplier called & said my kit had the wrong pick-up pipe? It was time to move onto the other repairs. The "bell washer" in the gearbox mount looked like this 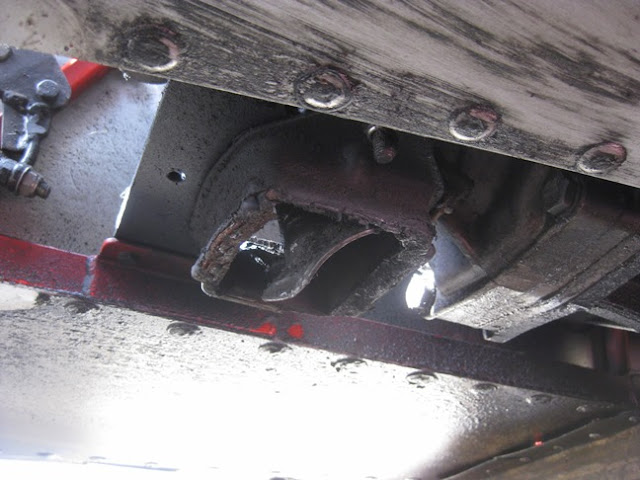 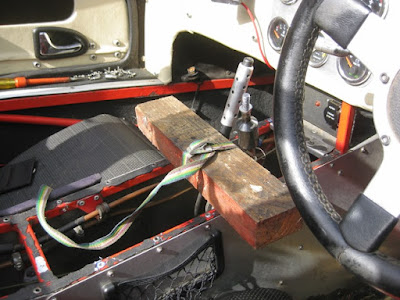 That's kind-of sideways, so it needed to get replaced. It all came off pretty easily in the end, I supported the gearbox from a block of wood above the tunnel & with a little persuasion it came off. Bit of a mess though, the bell washer is split & the mount rubber has separated from the surround. There's another mount in the post - should arrive Monday - & my brother has a spare bell washer. Fortunately the bolt & the mounting lug are OK. 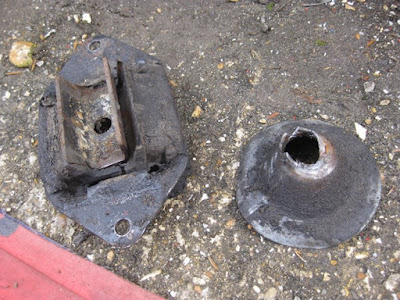 After that I took of the side pod I'd put the jack through, straightened the floor where it mounts & had a good look round it.

It's in a pretty sorry state & really needs replacing, but now is not the time.

The front wall had been broken by something a while ago, the rear wall was all cracked, one of the anchor nuts had pulled through the GRP.

So where to begin? 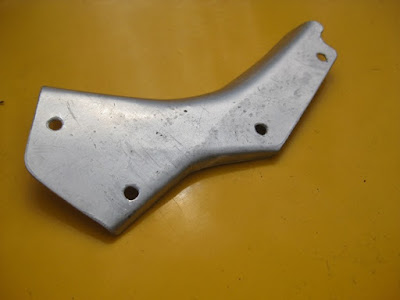 I started with the rear wall as I could mend that with aluminium.

I made up a new support bracket with stiffening flanges & riveted it on - that stabilised the back, one of the rear brackets broke as I took the pod down, so I made a new one of those too 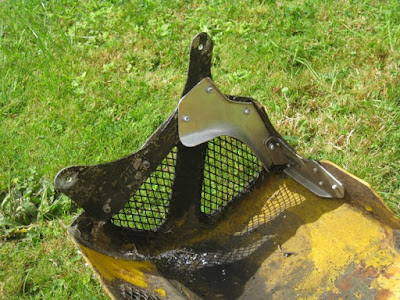 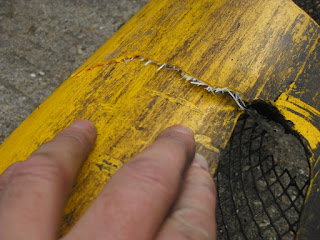 So now I had little choice but to look at the GRP, I'm really not confident with it which is pat of the problem, though this afternoon I was quite pleased with how it went. 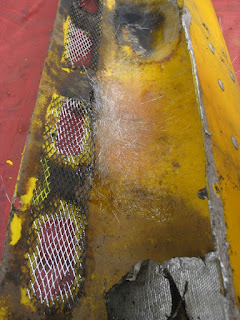 To the left is was the sorry sight at the start, so after a lot of cleaning & stripping the heat shielding out (this is the exhaust pod) I trimmed the frilly edge back until the panel fore & aft of the crack was aligned, then made up some resin & laid the glass across the inside.

After that I turned it over & filled the crack with 50% gel-coat, 50% resin & a little catalyst. That's still hardening off in the garage, but tomorrows job will be to cut it back to the surface & polish it. It will look a mess as the existing gel-coat is all cracked, but it'll look better than it did & it'll do for now - I may have a cunning plan for a semi-permanent "fix" which will change the look again, but that'll have to wait until I have somewhere more permanent to keep the car.