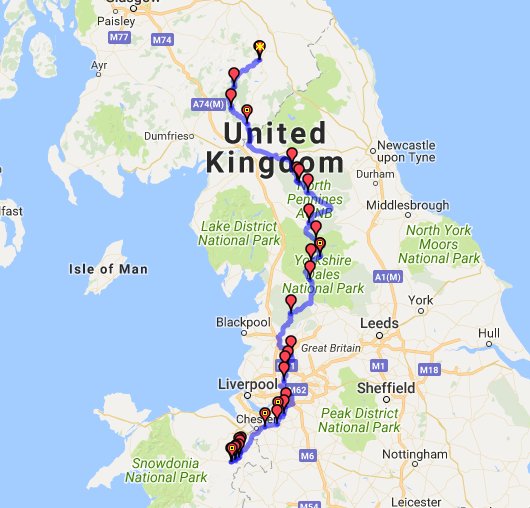 
Three countries in a day today as we left Scotland, passed through England & entered Wales.
Rain was forecast for our arrival, so I put the big windows on ready for the roof later – little did I know how soon I’d be putting it up. 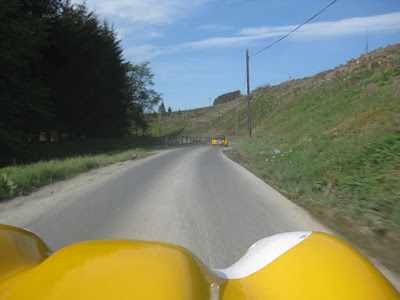 Just like yesterday it was misty in Selkirk, just like yesterday it brightened up as we left. We were travelling the same road Linda & I arrived by yesterday & we also noticed the same change in Tarmac quality as we passed from “Borders” to “Dumfries & Galloway” This morning, what had been nice smooth blacktop became rutted & potholed as we crossed the border & not long after that there was a crash as the back of my car went down one of these for which “sink-hole” might be a better description. The car felt OK (ish) but didn’t sound right, I slowed & at the next left hand bend the back of the car felt as if it was on marbles. 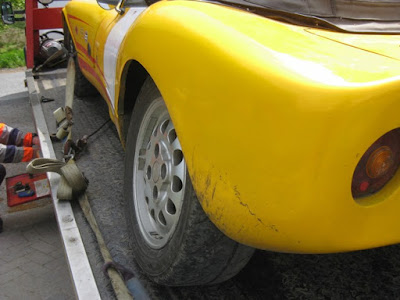 I stopped & called over the radio, I got out & the near-side rear wheel was leaning in towards the car at an unhealthy angle.
Soon after, Graham & Linda arrived & shortly after that Brian & Steve re-appeared having turned round & even Woody shortly after that in spite of having an appointment at Demon Tweeks for a new alternator.


The very nice man from the house I’d stopped outside came out & said we could put the cars on his drive & even use his garage (with pit & welding gear) if it would help, then he made us drinks. 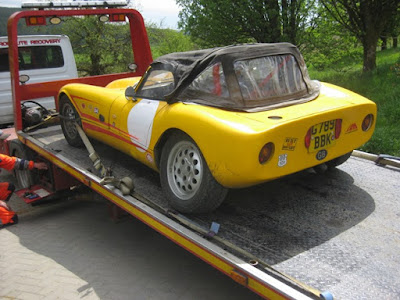 I called the RAC & said I needed a truck, not a patrol man, I built the car & knew it wasn’t a roadside fix. 90 mins later a patrol man arrived, said it wasn’t a road side fix & went away again. The other kit cars left at this stage, but GB generously stayed with me so I could at least complete the trip as a passenger. 90 minutes after that a flatbed arrived, but in the mean-time the cabaret started.
In scene one the police arrived & blocked the entrance to a dirt tack opposite the nice man’s house, stopping a car from immerging. Raised voiced suggested an altercation was happening, this was then upgraded to a fracas with full blown shouting coming from the car. The man inside was bellowing “I’M THE ONE BEING INTIMIDATED BY THEM” (which seemed unlikely given the shouting). The poice people calmed him down & after about ½ an hour they all departed. 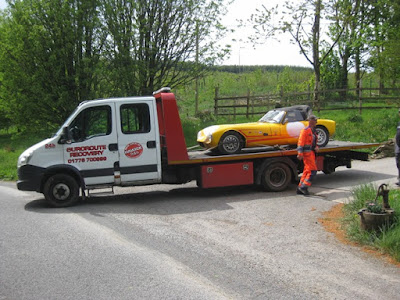 Shortly after that came scene two, in which the recovery truck arrived. For one thing the driver was every bit as unintelligible as “Les” the welder yesterday, then he reversed the lorry up the nice man’s drive, applied the handbrake firmly, climbed out & extended the slide-out ramp, which lifted the braked wheels off the ground & the lorry rolled down the slope, across the road (with the unintelligible man flailing after it) & came to rest JUST before it went down a grassy bank into a field.
At this point I decided welding the wishbone myself looked like a reasonable option.


With the driver’s composure regained, the car was loaded, buttoned up weathertight & sent on its’ way. I then travelled to Llangollen with Graham in the MX5. Our hotel was easy enough to find & we were pleased to hear the bar would stay open as long as the residents wanted – what wasn’t made plain was that a Welsh male voice choir would be singing in it. Much like my car, we retired early!
Posted by BlatterBeast at 18:21