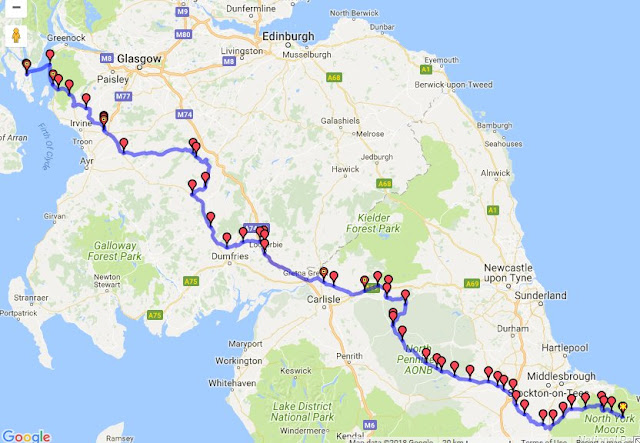 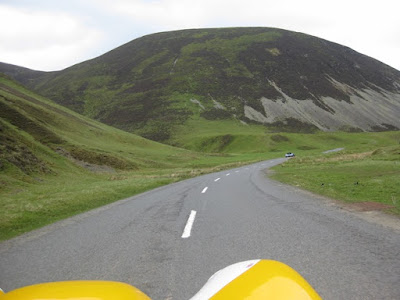 After a full English (yes, we’re not in Scotland yet) we girded our loins & headed for the border, but before the border there were the Yorkshire Moors, Northumberland & Cumbria to be enjoyed. The road surfaces were “variable” sometimes varying from “ribbon of smooth black tarmac to “ploughed field every 100 yards on the same road. Luncheon was taken in a very genteel garden centre where even Graham was younger than the regular customers by quite a long way.
At this point I noticed a little smoke exiting the bonnet & found that the heat-shield had fallen down onto the exhaust manifold, so in a fit of “it’s probably not doing anything anyway” I took it off & left it in the carpark. 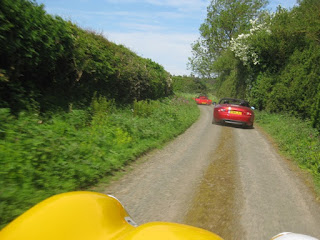 Then there was a little schlepping the motorway to get us northwards in short order before we took to the hills, up the smoothly tarmaced & quite glorious blat-track that is the Mennock Pass, a swirling road following the contour lines up a valley, then left & left again to come back down the adjacent glen.
We were then stuck with an A road until the next fuel stop at Kilmarnock where I found the new scorch marks under the bonnet where the heat shield used to be. Then over the moors before dropping into Largs, where I had planned a visit to Nardinis’ ice-cream parlour, but by now time was pressing so we went straight to the ferry up the coast to Wemyss Bay (Pr. Weeeeems Bay), bought our tickets & caught the ferry to the Isle of Bute & specifically the Victoria Hotel in Rothsay "how far is the hotel from the ferry" I was asked, "about 100 yards" I replied - & it was. An area outside the hotel had been coned off especially for us.
And we still hadn’t got wet.
When I got back to my room there was a missed call & a text message from my bank saying I was about to go overdrawn. When I looked, tomorrow’s hotel has taken £350 from my current account (without telling me) for the rooms tomorrow. Not impressed.