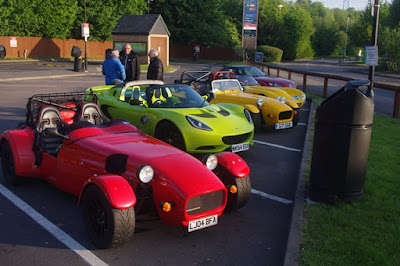 After we'd all met at Lakeside Thurrock, re-fuelled & used the McDonalds loos, we set off, as we pulled out onto the motorway I remembered last year when the Fury’s throttle return spring broke while accelerating on the M25, no such issue this year as the whole thing was re-designed over the winter, but in a car you built yourself, at the start of a long journey, you hear all the noises & smell all the smells that might possibly indicate a problem with the car. Pretty soon all that was forgotten though as we turned off the motorway & took to the back roads. After a couple of hours we pulled in for a cooked breakfast & called the last member of the crew to tell her we what time we’d be at the meeting point.


After a “healthy breakfast” we met Linda in the appointed place & headed for the lunch stop – which we all missed due to some sat-nav confusion compounded by Graham & Steve hiding their cars in the car park, so I assumed they'd missed it & gone on. Having convinced myself they were now ahead, I was quite surprised when they appeared in my mirror. 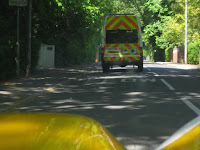 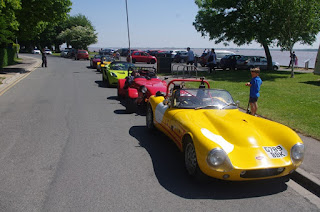 After a little random driving we found somewhere to stop for a photo under the Humber Bridge, then set off again (following a speed camera van - which I photographed) onto the Yorkshire wolds & the roads started twisting in the third dimension, so we got up & down as well as the left & right of Lincolnshire. The roads were good & sweeping & some bikers warned us of a camera van parked up round the next bend – which was nice, although we were in traffic & below the limit anyway.


Then suddenly all the satnavs just stopped. It seems they can only store 50 waypoints & my route had 60, I tried to open the route on the laptop to sort it out, but it was playing dead & having none of it. So we had to go direct to Whitby to refuel, then direct to Glaisdale to the inn we were in. But that just meant that beer o'clock just came round that mush soonerer.
Posted by BlatterBeast at 14:16