It's the Christmas break & I've not been out to the garage too much, but I did take the car out & 1/2 fill it with fuel - enough to prove that the fuel gauge still isn't working, so I think with the council spraying salt about with gay abandon (well, abandon anyway - I couldn't comment on the councils "orientation") I think it's time to take the car off the road & do some jobs properly.

A couple of days ago I popped over to Forrest Hill to pick up four wheels from Rich In the SKCC
they're borrowed - & just as well, because they don't fit. As anyone who modifies cars will tell you, selecting wheels & tyres is a bit of a nightmare, there's the wheel diameter, width, offset (where the mounting flange sits in relation to the rim centreline) & the bolt pattern to be considered, then there's the tyres, the diameter must match the wheel (obviously) but a variety of tyre widths will fit on any given wheel width, & a variety of heights for each width. Oh & there's an eclectic mix of imperial & metric sizes for good measure (see what I did there?).

﻿ The upshot of all that maths is that from outside the car, there should be NO difference, the overall diameter should be the same & the position of the tyre in the wheel arch should be identical

﻿﻿﻿﻿So having fitted the two wheels with the size tyres I wanted, I tried to push the car out to photograph it. It wouldn't move. Then I looked more closely as the front wheels. 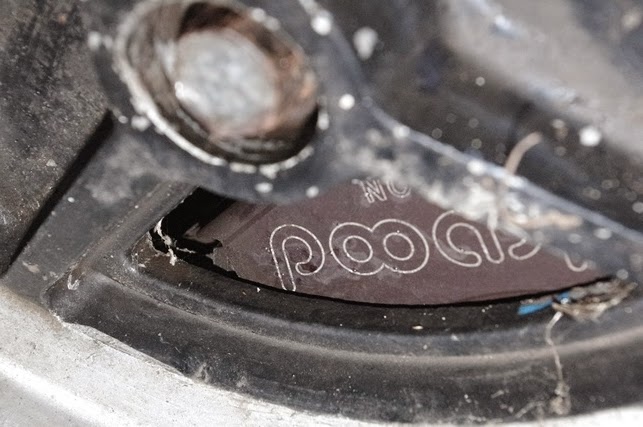 As can be seen from the pic, the brake callipers are touching the inside of the wheel – not good.

I’ll need to use spacers if I want to fit the four spokes. The rear ones only just fit under the arch. Hmmmm.
The problems with spacers are many fold. They mean the wheel studs are being bent rather than sheared which invites problems with metal fatigue, they mean the wheel isn't located properly in the centre diameter as well as another couple of points, so I'd REALLY rather not use spacers. I know people do use them successfully , but I'd rather not.


I did fit some stickerage to the engine bay, a replica Ford decal for the cam box & a negative earth one for the battery bay door. these are part of an on-going "plan" to make the car look more '60s. You'll see more of this over the coming months.
Posted by BlatterBeast at 15:01