The Joy of Blatting

Now THAT's what I'm talking about.

In-spite of a sleepless night & a headache, I stumbled out of the house at 06:00 heading for the garage. My steed was clean, polished & duct tape free, looking lithe  on the drive. The shape of the Fury continues to take my breath even after almost ten years of ownership.

The sun was almost up, a little early morning mist, painted pink by the sunrise & banded by roadside trees & shrubs. No other traffic to impede my progress. There was a blat on - & it was DRY. 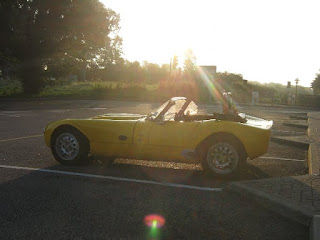 After a while my fellow Must Blatteers arrived, GB in his Orange Westie, Steve (or was it Roger?) in his orange Westie & Roger (or was it Steve?) in what can only be described as a "non-kit-car", not too bad though at least an Elise is made by a kit car manufacturer (at this point I'm ducking behind my keyboard). So, two orange "sevens" & two yellow wheels-in-the-body-curved-screen-opening-doors sports cars. There had be rumour on the forum of another car. "CustardPants" had requested the start time & route, but GB had been unable to get the full details to him before 05:00, so at 07:00 we decided he was a non-starter & left. 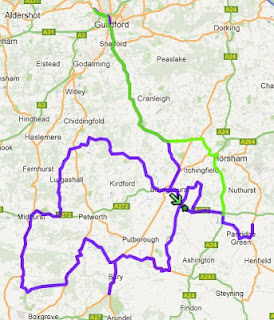 The route was basically an old one with a tweak or two, the start & end points only being about four miles apart, but we'd be doing somewhere in the region of 80 miles to get from one to the other. Not only were we lucky with the weather, but also with the traffic. With the sun getting warmer by the minute we circumnavigated west Sussex, eventually getting separated from Roger & Steve (or was it Steve & Roger?) by the inevitable milk truck, you see that sticky out bit on the route at about six o'clock? that's both sides of a road that is, out & back & yes we did pass them going the other way. Also passing on the other side of the road was CustardPants, who had arrived at the launch point a little late, & taken off on a route of his own devising. 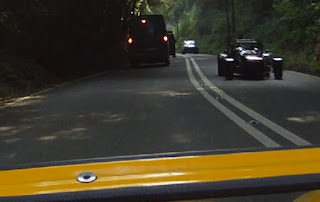 There he is in this still from the BlattCam. Shortly after this we were even more surprised to see Steve & Roger (or was it Roger & Steve?)also going in the other direction - can't explain that one at all.

What-ever, in glorious sunshine GB & myself arrived at "The Chalet", an honest-to-goodness transport cafe & wondered aloud about S & R's (or maybe R & S's) route, but shortly after, they arrived & parked up in a pleasingly symmetrical arrangement - though we could've been closer together it must be said. All we needed was for CustardPants to show up & park in the middle - but alas that wasn't to be. 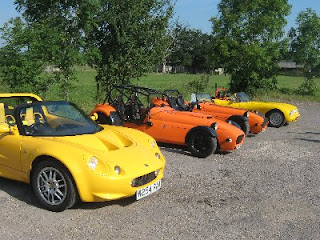 So three of us ordered the Chalet Special, one (Roger - or perhaps it was Steve) broke with SKCC tradition & ordered an omelet & chips - a "healthy option" in SKCC terms. & we chatted & breakfasted outside while the sun shone.

But all too soon we heard the call of home, or at least felt sufficiently guilty about the length of the jobs list our loved ones would've prepared for us & we set off. GB, Steve & Roger were all heading more or less north, while I was making for the west, so I headed off up the A22 alone. After a while a green dot appeared in the mirror & over the course of half a mile or so, resolved itself into the shape of a Porsche 911 - couldn't tell you what type, they all look alike to me, but it was a modern one. Anyway, having passed the cruising Fury, he rounded a roundabout & "gave it large" to use the vernacular, & suffice to say the Fury was not found wanting - at all - in the least.

One acceleration was enough, I was not going to let it develop. I'd proved my point. German engineering? The South Downs is littered with it.
Posted by BlatterBeast at 21:48