Then I found the main problem. With the bonnet shut there was a clonking in the steering, with it open there wasn't. Using the BlatCam as an endoscope revealed that the bonnet was pushing the airbox down onto the steering universal joint. I couldn't raise the bonnet without the car looking ridiculous, I couldn't lower the engine without the sump getting even closer to the ground. After some pondering I took the throttle bodies off the manifold & cut 7 - 8mm off the length of each runner, the TBs would now sit closer to the engine & away from the slope on the bonnet. By keeping the support strut the same length, the TBs would be forced further down, giving more clearance. The steering U/J was still an issue though, so I cut the offending corner off the airbox, taped over the resulting hole & filled the corner with araldite, once it's cured I'll take the tape off & re-fit. I may even put some aluminium tape over the araldite to konseal consele conceel hide wot I done.

This was of course a whole bunch of faff, but it should have cured one of the car's long standing niggles.

Also on the positive side - may I proudly present - the new fuel tank. 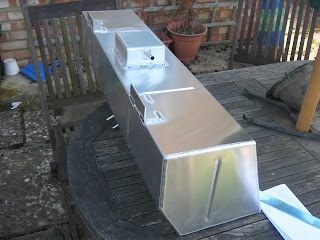 That's upsidedown that is but it shows the swirl pot & the brackets for fixing it to the diff cage. It also shows that it's a very very shiny thing - which is good.