With a long bank holiday for the Platinum Jubilee I had a little time to sort out some repairs for the couple of minor matters thrown up by RogueRunners 22. 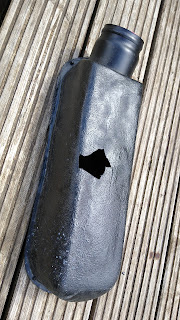 Most of the time away there was a faint petrol smell which was caused (I think) by the either the cork seal round the fuel tank access panel weeping a little, or - more likely - the vent valve. I say the vent valve because it didn't smell when the tank was properly full (when the cork seal was flooded & the vent valve would be held shut), but it did smell when the tank was 3/4 full (when the vent valve would be mostly open & fuel was sloshing about). I took out the panel in the boot floor & knocked a larger bulge in it where the valve is so I could fit a hose which runs up to a space under the rear bulkhead, now any fuel escaping before the valve shuts is held in the hose until it's drawn back in. I also put some instant gasket on the cork seal for good measure. 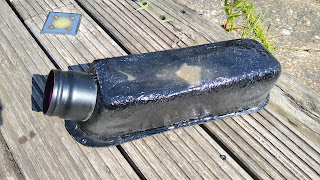 Next, the airbox. There was a pattern of cracks, mostly around the middle radiating out from the middle bit, then running along the corners, so I'm guessing the air pulses were making it pant (if you're British) or "oilcan" if you're American, that would account for the cracking & the pattern of the cracks. Maybe I should've used TWO pairs of wooly tights to make it. 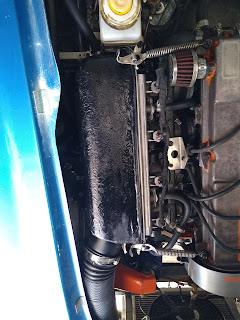 I duct-taped the loose bits back into place & painted the inside with GRP resin mix, then a layer of chopped strand mat & more resin on the inside, remove the tape & add a couple of layers on the outside where the missing bit wasn't & a big layer or two right over the the lot.

Will it fix it? No idea, it depends if I'm right about the pulses & how much the sides move now the top wall is stiffer. But making a new one with what I've learned from making this one isn't a big job. 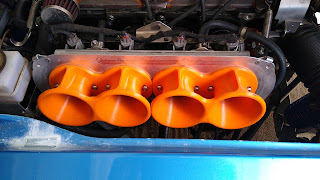 But the really good news is that the trumpets have suffered no heat damage. They'll be fine all the time the engine's running as they are cooled by the intake air, but I had wondered if they'd suffer when the car was parked up with a hot engine bay. but so far, so good & as they obviously contributed in no small way to the 175bhp it made on the rolling road, this is a good thing.
Posted by BlatterBeast at 11:42